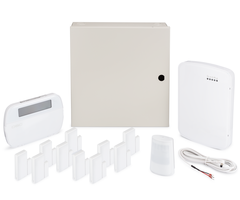 The DSC NEO-2128-PK10-ENC-AT is a system kit for large homes and businesses. The highlight is the DSC HS2128NK PowerSeries NEO w/ 128 Zones. You also get a keypad w/ integrated PowerG Transceiver, a dual-path AT&T LTE & IP Communicator, 10 PowerG Contacts, a PowerG Motion, and an LT-Cable.

The DSC HS2128NK PowerSeries NEO is certainly a panel to be reckoned with. It supports 128 total zones and a load of features that you can only find on the most powerful security systems available. This is a great system if you have a larger home or business, and you need support for a large number of sensors. However, you should also consider the fact that this system only has enough on-board terminals for eight (8) wired zones. To use additional hardwired zones, you need to add one or more DSC HSM2108 Expansion Modules. Each expansion module will increase the number of supported hardwired sensors by eight (8).

But if you want, you can technically forgo hardwired sensors entirely. This is possible by using wireless PowerG Sensors. This system kit is PowerG-ready thanks to the DSC HS2LCDRF9 N NEO Keypad that we have included. The keypad has a built-in PowerG Transceiver exactly for this purpose. You can start enrolling and programming PowerG Sensors once you have wired and addressed the keypad. The best aspects of PowerG Sensors include their 2km wireless range in open air and their 128-bit AES encrypted communication. We have bundled ten (10) DSC PG9303 Door/Window Contacts and one (1) DSC PG9914 Motion Sensor for you to start with. Keep in mind though that every PowerG Sensor will also count towards the limit of 128 zones.

The security system wouldn't be complete without a communicator, and you get a great one here. The DSC TL880LEAT N is an Alarm.com Dual-Path Communicator that works across the AT&T LTE Network and through a hardwired ethernet connection for IP service. Only one path needs to be functional for the system to communicate. But remember that Alarm.com requires you to activate the cellular portion of this communicator since IP-only plans are not supported on this platform. This will require a monitoring plan that includes cellular communication and access to Alarm.com. Some examples of compatible monitoring plans include the Gold and Platinum Plans from Alarm Grid. After activating the communicator, you will be able to control the system through the Alarm.com website and mobile app. This includes both security and home automation functions. The communicator also has a built-in Z-Wave Plus controller so that you can start setting up a complete Z-Wave network based around the system.

Lastly, you get a fantastic power cable called the LT-Cable. This makes powering your system super convenient. You will be able to easily connect the panel with a compatible transformer (not included) using the LT-Cable and a screwdriver. The only thing missing from this kit is a backup battery. If you are just starting out with a few system accessories, then an UltraTech 1240 might suffice. But once you really get the HS2128NK System going with a large number of sensors and equipment, you will probably need something more powerful. An UltraTech 1270 can often get the job done. The typical backup battery must be replaced after three (3) to five (5) years.