Can I Link Together Multiple Honeywell VISTA Systems? 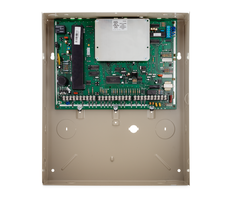 Panel linking was a good idea in theory, but it was a mess in practice. The feature was meant to behave in a similar way to partitioning. Alarm panels would be the highest level partition, and then each individual panel could support up to eight (8) sub-partitions. The first 50 user codes on each panel could be given the authority to "travel" to other panels and their sub-partitions. Each panel would still need its own account information, and each would require its own communication path with a central station.

The Vista-128BP, Vista-128BPE, Vista-250BP and Vista-250BPE all supported panel linking. Panels to be linked did not have to be the same model. They only needed to support the panel linking feature and have a VA8200PLM connected to the keypad bus. Wires were then run from one VA8200PLM to the next. This established a link between the panels.

The VA8200PLM modules use the RS-485 protocol to communicate with one another. RS-485 has a wiring limitation of 4,000 feet using any gauge twisted pair wire from 16 AWG to Cat 6 (24 AWG). Using this protocol allowed up to eight (8) panels to be linked over a relatively wide area. College campuses, medical campuses, and warehouses were all applications where this feature could come in handy.

Enter Total Connect 2.0. With the addition of the Vista-128BPT and Vista-250BPT Panels, controlling multiple panels became much easier. Total Connect 2.0 allows a user to use an iOS or Android app or a web browser to do just about anything that can be done from a panel keypad. And with the recent upgrades to TC2 in regard to partitioning, it's even easier to control large and more elaborate systems. Add to that the fact that 500 or more separate locations can be linked to a single user's login, and there's really no need for panel linking to exist today.