A Honeywell 5800RP cannot be used to repeat signals from another 5800RP wireless repeater but more than one 5800RP can be used on a Lynx Touch L5210 control panel.

If a Honeywell 5800 series devices is sending a supervisory trouble signal, in most case installing a 5800RP wireless repeater resolves this issue.

The Honeywell K10145WH is the needed power supply for the 5800RP wireless repeater. The LT Cable is also recommended but users can run their own 18-22AWG, 2 conductor cable. The Honeywell 5800RP comes with a 7VDC battery and will provide up to 6 hrs of power if AC power is lost for any reason.

The Honeywell 5800RP should be installed between the 5800 series device that needs RF extension and the L5210 control panel. Set all the Dip switches to off and plug the power supply into an outlet. The 5800RP can also be programmed to be supervised. Program a zone on the L5210 control panel with the 5800RP’s serial number, as 24 hour auxiliary, loop 1 and set the zone type supervised RF. 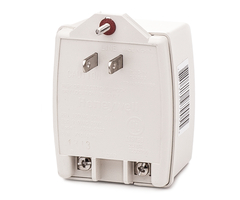