Can I Use An LT-Cable With The Lyric Security System?

Yes, the LT-Cable is compatible with the Lyric Security System.

The Honeywell Lyric alarm system does not have a DC port like the Lynx Touch control panels which the LT-Cable plugged directly into. But, Honeywell has reconstructed the LT Cable now consisting of two pieces. One end has a pigtail that has two wires, a red and black spade connector that can be connected to the AC power connection or the two raw wire ends can be connected to the screw terminals of an alarm system. The back side of the pigtail is a female DC port where the male DC barrel connector plugs into making it easy to power down the Lyric Controller Security System. To reboot the Lyric Controller Security System when using an LT Cable, remove the male DC plug from the pack end of the pigtail.

Users still have the option to purchase wire, measure, splice, and connect the wire to the panel and transformer. Using this method, users will have to disconnect the control panel battery and remove the transformer from the outlet to reboot the Lyric Controller panel.The Lyric Controller Security System has a 7 inch touchscreen, a built in WiFi module and a built in Z-Wave module.

The Lyric Controller has 2 hardwired zones (not to be used for fire or carbon monoxide detectors) and supports up to 128 wireless zones.

Using an LT-Cable with the Lyric Controller Security System, users can pair it with a desk mount and place the panel on a counter, end table or nightstand. 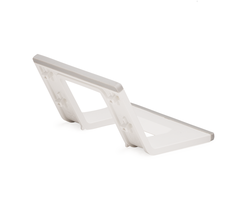