The Honeywell 5800 MINI and the Honeywell 5819S are both wireless sensors that can be used as a door and window contact. However, the 5819S can also be used as a wireless transmitter and/or as a shock sensor. The 5800MINI is smaller and is used to protect a door or window opening only.

The 5800MINI and the 5819S are both part of Honeywell's 5800 Series. This means that they can be used with any Honeywell or 2GIG Security System. Both devices can function as a door and window contact. To do this, a magnet will need to be used with the sensor. Both devices come with a magnet. If a magnet is lost, the best replacement to use is the Honeywell 5899.

Most people who purchase a 5819S don't do so for use as a door and window contact. Instead, the device is most commonly used as a shock sensor. This type of device is installed directly on a glass surface, such as a window or casing. If the glass is struck, the corresponding shockwaves will cause the device to activate so that an alarm can be triggered, whether the glass was actually broken, or not. This is different from a standard glass break, which listens for the sound of breaking glass. The 5819S can also be used as a wireless transmitter so that a hardwired sensor can communicate with a wireless system. None of these features are possible with a 5800MINI. Additionally, the 5800MINI is smaller and more compact than the 5819S.

The function of the 5819S is determined by the loop number(s) that are programmed with the panel. The first loop (1) is for use with the built-in shock sensor. The second loop (2) is for use as a door and window contact and utilizes the built-in reed switch with the included magnet. Finally, the third loop (3) allows the device to function as a wireless transmitter for a normally closed wired contact. A 5819S sensor can be programmed with a panel multiple times so that all three functions can be used with the system, if desired. On the other hand, the 5800MINI has only one loop (1), and its magnet and reed switch can be used to protect a single opening. 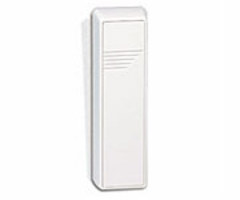