How Do I Delete a Defective Z-Wave Device Locally at the 2GIG GC3 or GC3e?

You can delete a defective Z-Wave device locally at the 2GIG GC3 or GC3e by accessing Smart Home Settings and locating the failed node. You can then choose the Remove option to delete the device from the system. Return to the home screen once you are finished deleting the failed device.

The 2GIG GC3 or GC3e will show a programmed Z-Wave device as "failed" because it is unable to detect the Z-Wave device on the network. This could be because the device has been powered down, or it has been taken out of wireless signal range. Another possibility is that the device was cleared from the network using another Z-Wave hub or controller. And of course, the device could simply be broken or defective. Regardless, you get the error because the GC3 or GC3e is unable to detect a previously programmed Z-Wave device that was never properly removed from the network.

Complete the following steps to delete a defective Z-Wave device from a 2GIG GC3 or GC3e:

2. Delete the failed device. Choose the option View All Devices. Then locate the failed device. You will know that a device is failed because there will be a yellow triangle with an exclamation mark (!) inside of it. That is the error icon, and it indicates that the GC3 or GC3e is unable to detect it for one reason or another. In the example below, you can see that that Z-Wave siren has failed. 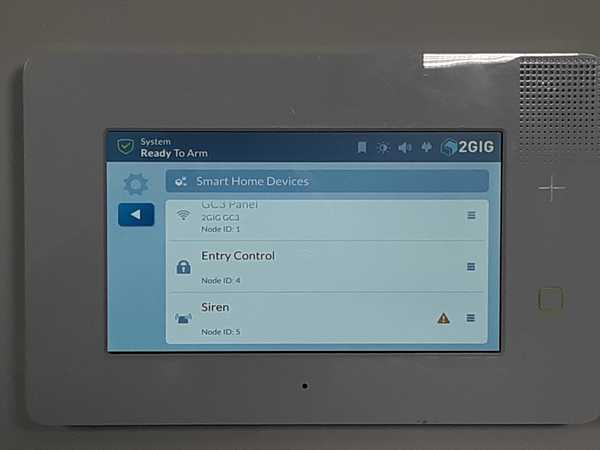 3. Return to home screen. Repeatedly press the return arrow on the left side of the screen until you return home. The changes you made in Smart Home Settings will be automatically saved.