How Do I Enroll the PowerG PG9914 with a Qolsys IQ Panel 2 Plus?

You can enroll the PowerG PG9914 with a Qolsys IQ Panel 2 Plus by putting the IQ Panel 2 Plus into its auto-enrollment mode, opening up the PG9914 sensor, pressing and holding its enrollment button until its LED turns orange, releasing the button, and configuring the zone settings.

The DSC PG9914 is a wireless PowerG Motion Detection Sensor. The sensor uses passive infrared (PIR) technology to detect movement. It has a maximum coverage area of 39 feet, and it provides pet immunity for small animals weighing up to 85 pounds. Like all other PowerG Sensors, the DSC PG9914 uses 128-bit AES encryption for enhanced wireless security, and it has a maximum wireless communication range of 2,000 feet away from the Qolsys IQ Panel 2 Plus when used in an open air environment.

Since the DSC PG9914 is an encrypted sensor, it can only be enrolled with one system at any given time. If you are having trouble enrolling the sensor, then you may try performing a factory default to clear its memory. This can be done by opening up the sensor and then pressing and holding its enroll button until the LED light on the sensor blinks red three (3) times. To open up the sensor, stick your fingernail into the crevice on the bottom of the sensor in the center, and press into the sensor to pop off its back cover. The enroll button is found next to the battery compartment for the CR123A battery. You may want to use a screwdriver to press the enrollment button if you have large fingers. 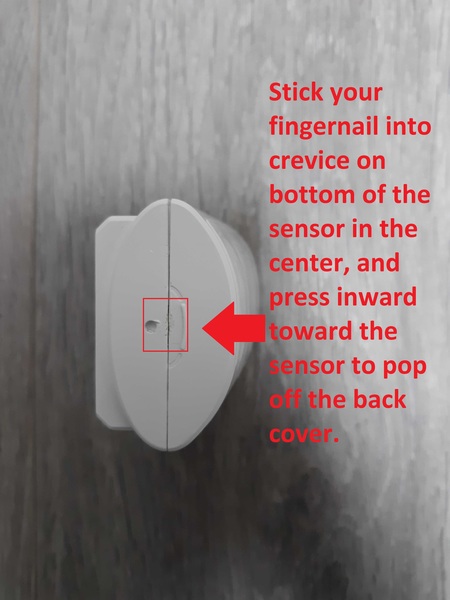 Complete the following steps to enroll the PG9914 with the Qolsys IQ Panel 2 Plus:

1. Open the sensor. Locate the bottom of the PG9914 sensor. Stick your fingernail or a flathead screwdriver into the crevice in the center. Press inward towards the sensor. The back cover should pop off, giving you access to the inside of the sensor.

3. Send an enrollment signal. On the PG9914 sensor, press and hold the enroll button until the LED turns solid orange. Then release the button. The IQ Panel 2 Plus should display an "Auto Learn PowerG Sensor" message stating that the sensor is trying to be added. Click OK. If the IQ Panel 2 Plus is not displaying the message, then try factory defaulting the PG9914 by pressing and holding the enroll button until the LED light blinks red three (3) times. Then try sending the enrollment signal again. If no LED light is appearing, then make sure that a fresh CR123A battery is installed inside the PG9914. No LED light will be displayed if the sensor is not receiving power. 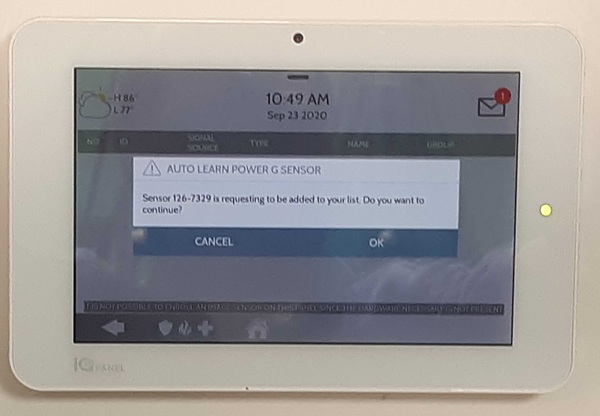 High Traffic Shutdown will prevent the sensor from constantly sending signals to the IQ Panel 2 Plus when it is repeatedly activated. This is done to preserve battery life. The default selection is 2 Minutes, and it means that the sensor can only send a fault signal to the panel once every 2 minutes. Adjust as desired.

Click Add New after you have finished adjusting the zone settings. This will save your changes. Once programming is complete, press the picture of the house at the bottom to return to the main screen.