You can get into Honeywell L5200 or L5210 programming if you're locked out by powering the system down and holding down the panel's home button while reapplying power. You will then perform a specific sequence of commands to get back into programming. This is is called the backdoor method. 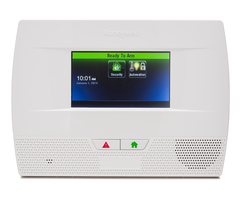 1. Reboot the panel. The easiest way to reboot an L5200 or L5210 is to choose the option within the Master Tools Menu. From the main screen, select Security > More > Tools > Master Code (default 1234) > Test > Reboot > Yes. The system will begin its rebooting process.

However, it's possible that you might not know the Master Code for the system. If that's the case, then you must perform a hard reboot. Open up the panel, and unplug the backup battery from its port. This will cause a cover tamper condition. Press the touchscreen, or the Home Key beneath the touchscreen to silence the trouble beeping. Keep the panel open so that you can reconnect the backup battery later. You can complete the rest of this process with the panel still open.

Once the battery has been disconnected, unplug the panel's transformer from the wall outlet. The transformer should be secured to the outlet with a screw. If so, you will need a screwdriver to perform this step. This will power down the panel completely. Wait a few seconds, and plug the transformer back in to begin rebooting the system.

2. Begin the backdoor process. As soon as the panel lights up, press and hold down the Home button on the front of the panel, beneath the touchscreen. You will be required to hold down this button for several moments. Continue holding as the message "System Standby" appears. Once you see the top bar turn green with the message "Ready to Arm", or turn yellow with the message "Not Ready to Arm", then you can release the home button. This will begin the backdoor process.

3. Clear the lockout. After you release the home button, you must very quickly press "Security", followed by "Arm Stay". If the process was performed correctly, a numeric keypad will appear on the touchscreen. Once this happens, click "Clear", followed by "00". You will then enter the Installer Tools Menu. Then choose "Program" to enter the programming menu.

4. Don't get locked out! Now that you are in programming, you don't want to get locked out again. If necessary, change the Installer Code to the default of 4112 so that you can easily look up the code if you need to. Then use the return arrow in the upper-right corner to exit programming. When asked if the Installer should be allowed to re-enter programming, choose "YES". If you do not choose "YES", then you will become locked out of programming again, and you will need to perform the backdoor method again.

Also, if you had to perform a hard reboot, remember to reconnect the backup battery and close the panel once you have finished performing the backdoor method to access programming. Disarm the system twice to clear the cover tamper trouble. And remember to reapply the set screw for the transformer if you removed it earlier.