You can program the Honeywell 5806W3 to the L7000 by putting the L7000 System into its device enrollment mode and then activating the test button on the 5806W3 smoke detector three separate times to learn it in. The settings for the device can then be adjusted and configured as needed.

Complete the following steps to program the Honeywell 5806W3 to the L7000:

2. Enroll the 5806W3. Use a thin object, like a tooth pick, to press and release the recessed test button on the front of the 5806W3 three times. Each time, the test button is activated, the panel will confirm by making a chime. After activating the test button three times, the sensor will automatically be enrolled.

The diagram below shows the test button on a 5806W3: 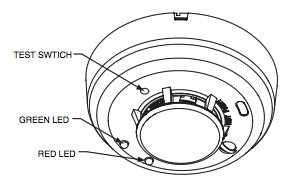 4. Save the changes. Press the "Save" button in the lower-right corner of the screen to save your changes. Then press the return arrow in the upper-right corner until you return to the home screen. Make sure to choose "Yes" when it asks if the installer should be allowed to re-enter programming.