How Do I Walk Test a Qolsys IQ Panel 2 Plus?

You can Walk Test a Qolsys IQ Panel 2 Plus by faulting various system sensors and making sure that the panel receives the incoming transmissions. You can also use the System Tests Menu to check the signal strength for programmed sensors. This is also used for testing network connections.

Traditionally, a Walk Test refers to a certain mode on a security system that is used for testing the proper operation of programmed sensors. It is called a "Walk Test" because you would have to walk around to set off the programmed motion detection sensors. The Qolsys IQ Panel 2 Plus doesn't really have a dedicated Walk Test mode of its own, but that doesn't mean that you can't easily test programmed system sensors.

If you just want to get a base reading of RF signal strength for programmed sensors, then it is recommended that you just check the System Tests Menu. You will be able to check and make sure that all of the programmed sensors have adequate signal strength. If there is a particular sensor that you want to test, then the easiest option to just fault that sensor and make sure that the fault appears on the system. Depending on the sensor you are testing, you may need to put your system on test mode first. This is particularly important for life-safety sensors like smoke detectors and carbon monoxide sensors, as well as any other 24-hour security zone designed to trigger an immediate alarm.

It is important to note that the Qolsys IQ Panel 2 Plus will have separate sections within the System Tests Menu for PowerG Sensors versus legacy RF sensors (319.5 MHz, 345 MHz, or 433 MHz). You will be able to perform a few different functions for the PowerG Sensors,

In addition to testing sensors, the System Tests Menu also allows you to test other system functions, including network connections (WIFI and cellular), as well as automation functions, such as testing Z-Wave devices and checking the Z-Wave mesh network. Using the System Tests Menu, along with just faulting sensors and making sure that they report to the system is all you need to do to complete a full system test.

For this FAQ, we will strictly focus on testing security and life-safety sensors, rather than testing network connections and automation devices. Complete the following steps to Walk Test a Qolsys IQ Panel 2 Plus:

2. Test programmed sensors. If you are just needing to test a small number of sensors for proper operation, the easiest thing to do is just fault the sensors and make sure that the faults appear on the system. Depending on the zone, this may put your system into alarm mode. But don't worry, because as long as you put your system on test mode with the central station, no dispatch will occur.

For some sensors, it might be a good idea to put a chime on the zone so that you can hear it fault. This is particularly useful for devices like motion sensors, which immediately clear after faulting. For more information on enabling panel chimes, please check out this helpful FAQ. You can then disable the chime for the zone when you are finished.

A good system for testing sensors is to get a friend to stand by the system and check for faults and chimes, while you go around and fault various sensors. This can be a lot easier than testing sensors your self. Other than that, just know the general process for testing various sensor types. It may be a good idea to check the manual for the sensor to see if there is any recommended testing process. We have several common sensor types listed below:

Additionally, it is very important to understand the symbols that will appear next to the various zones on your IQ Panel 2 System. You can use these symbols to determine whether or not a sensor is faulted. Typically, the symbols for "Open" and "Active" indicate a faulted sensor. Depending on the sensor, the "Active" condition may only appear for a brief moment, which is why setting a temporary chime for the sensor can be so helpful. For more information on Qolsys IQ Panel 2 zone symbols, please see this FAQ.

Once you access the System Tests you will have the option for many different tests. For this FAQ, we will be focusing on Sensor Tests and PowerG Tests. 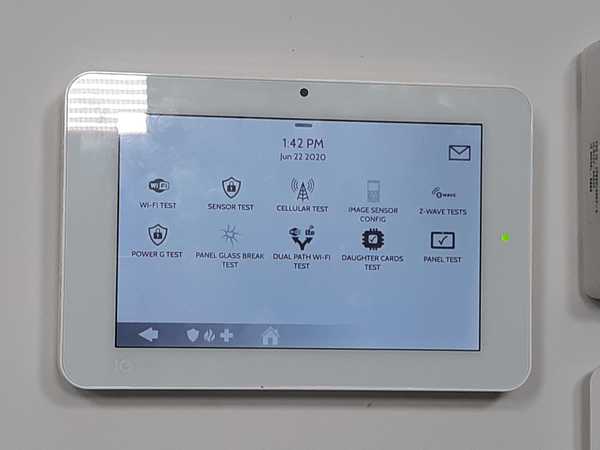 4. Check sensor signal strength. The System Tests Menu has many different categories and selections. By choosing the Sensor Test, you will be able to see the signal strength for any given non-PowerG sensor over time. This can be particularly useful if you move the sensor. To test this, we took a programmed sensor and moved it far away from the system to where it was out of range. You can see this in the graph below. Note the yellow portion where the signal strength dropped. If the range falls below the red line, then RF signal loss will occur. 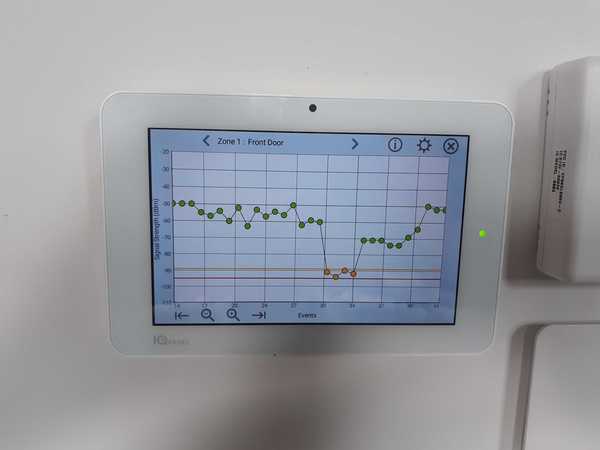 5. Check Power G signals. If you choose the PowerG Tests option, you will be able to perform a variety of tests related to PowerG Sensors. All of the PowerG Sensors programmed with the system will be displayed. You can click on "Run" next to a PowerG Sensor to have the system run a test to make sure that the sensor is communicating properly. There will also be a "More" option that you can choose to get more information about the sensor. The More option also includes an option to run an "TEST LED" that you can use to test the LED light for the sensor. 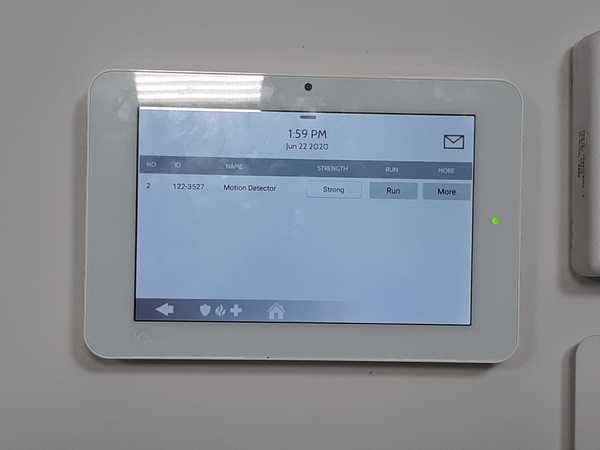 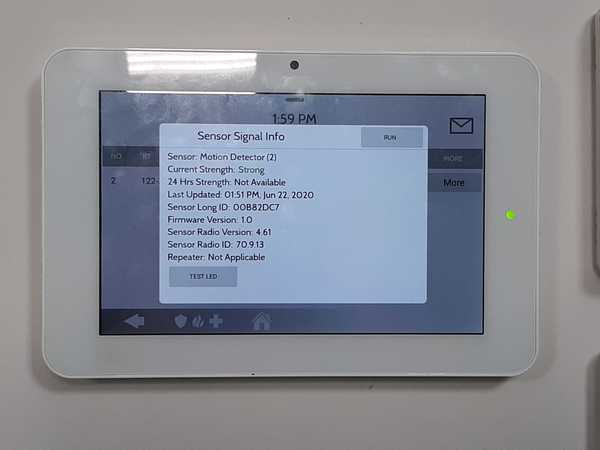