How do I wire multiple panic switches to Vista-128BPTs?

To answer this question, we must first talk about panic switches in general. Hardwired panic switches can be Normally Open (NO), Normally Closed (NC), or Form C, which means they can be wired either normally open, or normally closed. The first thing you must do, in this instance, is determine which type of panic switch you want to use. Traditionally, Normally Open switches are used for life safety devices such as smoke detectors, Normally Closed devices are used to protect openings from burglary (a normally closed sensor tied to a door that you want to remain closed just makes logical sense) and Form C devices are typically more expensive than either of the other two options and are usually not required in this situation. Because hardwired zones on the Vista-128BPT require an End of Line Resistor, and we're going to program our zone as a 24 hour alarm, which will activate whether the zone is shorted or opened, and whether the system is armed or disarmed, it doesn't really matter which of these types of switches we use, but I will show both Normally Open, and Normally Closed wiring. A Form C panic could be wired in either of these configurations, at your discretion. 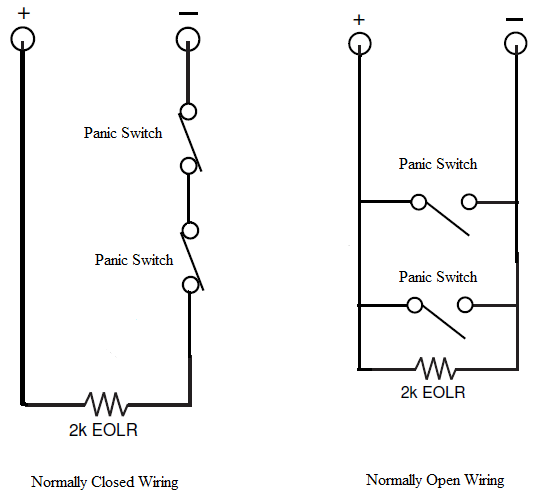 As you can see, in the Normally Closed configuration, the 2K End of Line Resistor connects to one side of the last panic switch in the circuit, and only one of the zone terminals. This is called wiring in Series. In the Normally Open circuit, the 2K End of Line Resistor connects across the two terminals at the last panic switch wired in the circuit. This is called Parallel wiring.