How to wire the trigger on the 2GIG GC3?

The 2GIG GC3 has terminals for 2 open collector outputs, OCL1, and OCL2. In the current firmware (up to 3.0.2), only open collector 1 is used. The open collector is a floating negative, which shorts to ground (terminal 2) when activated and provides up to 250mA of current at about 16VDC 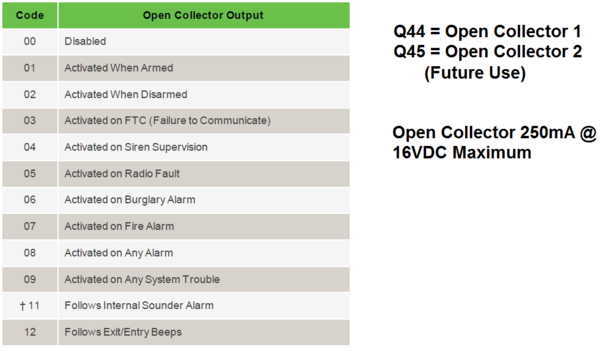 Above, you can see the programming options for the output. When open collector 2 becomes available, its programming options will be the same. There are a number of ways this output could be used. You could wire an LED to the OCL1 terminal, and Power + (Terminal 1) and program the trigger to activate when armed. This would provide an armed LED, which you could make visible from outside*. You could wire a Piezo-electric sounder (as long as it draws less than 250 mA of current) to the OCL1 terminal and Power + (Terminal 1) and program Q44 for "Activated on Burglary Alarm" to add an additional internal sounder, possibly in an area of the home with no keypad. Certain pieces of video equipment, such as DVR's or some Cameras, can be activated by providing a short to an input. You could wire OCL1 and Power - (Terminal 2) to this input, program Q44 with "Activated on Burglary Alarm" and activate the video equipment upon any burglary alarm. 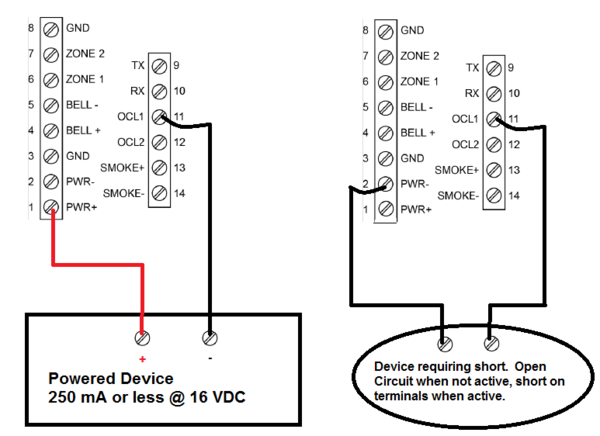 *Note: Depending on the LED used, you may need to put a resistor across the circuit to keep the LED from burning out too quickly. The resistor required may vary, but start with a low value, around 1K or 1000 Ohms, and go from there.