Should I Use Resistors on my VISTA 21iP?

The Vista-21iP has 8 hardwired zones built in, and can be expanded to include up to 48 hardwired zones total, using the 4219 or 4229 module. End of Line Resistor (hereinafter called EOLR) supervision, is used to prevent wiring issues, accidental or malicious, from rendering a panel zone inoperable.

Hardwired devices come in either Normally Open, or Normally Closed configuration. Most security devices are Normally Closed, meaning in their normal state (door closed, window closed, no motion detected, etc.), there is continuity between the two sides of the device, whether that be screw terminals, or wire leads. In the past, most alarm panels required that EOLR supervision be used for all hardwired zones. Without EOLR supervision, most burglary zones would be programmed as Normally Closed. This means, if the alarm panel sees a short on the zone it’s happy (no fault) and if it sees an open on the zone, it’s unhappy (fault). The problem is, what if a burglar is able to put a short across the zone for the purpose of rendering it useless? They could put this short across the screw terminals for the zone, or across any single point connected to the zone, a window or a door. Now, they can open and close this device at will, and to the panel, it always appears to be closed, because of the short. See the diagrams below. In each case, the red lines show the ways in which a Normally Closed zone might be compromised. The diagram is a bit misleading, because it makes it seem like each zone configuration is equal, but bear in mind only the Normally Closed configuration, or the EOLR configuration with the resistor at the zone terminal can be defeated within inches of the alarm panel. The zone with the resistor at the end of line indicates a wire run that may be 10’s if not 100’s of feet long, and would be much more difficult to pull off, and impossible to do while the panel is armed. In any of these configurations, if someone manages to put a short, in the form of a wire jumper, across one of the openings, they could render that opening useless, but, in order to do this, they need access to the inside of the house while the system is disarmed. 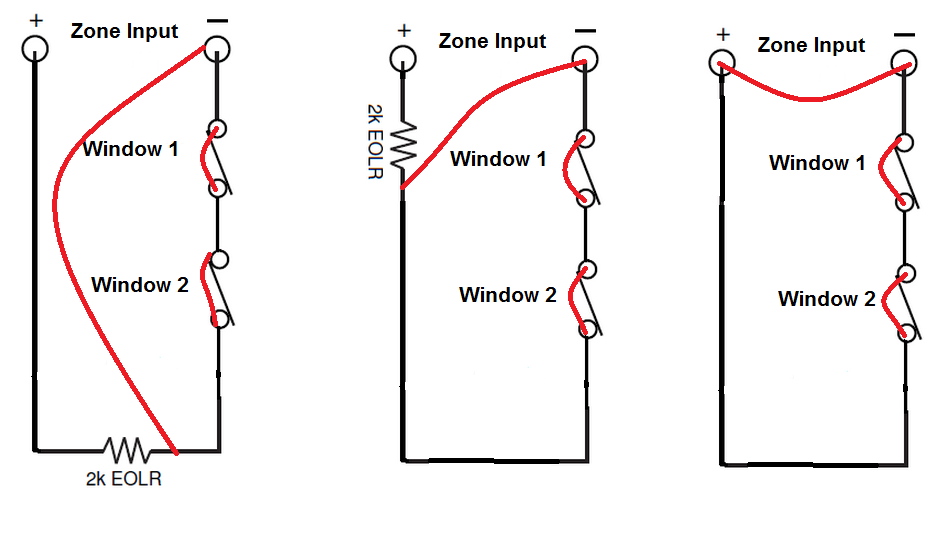 Up to this point, we’ve discussed how EOLR supervision helps prevent malicious attempts to defeat a zone, but what about wiring issues, or issues with the panel zone itself? If you have a zone programmed as Normally Closed, you’re telling the alarm panel that it’s normal for that zone to have a short, or 0 Volts DC on the zone, and it’s abnormal, or considered faulted, for the zone to have voltage on it. But what if the zone has a problem, and is always shorted? Would you notice? If you opened the back door, and it didn’t show a fault, would you realize there was a problem? With EOLR supervision, you’d notice because if something like this happened, the zone would always be faulted, and would keep you from arming until you either bypassed it, or figured out what the issue was. Troublesome? Maybe, but I’d rather know I have an issue so I can fix it, as opposed to thinking I’m protected when I’m clearly not.

In new construction, if the alarm panel to be used is known, it would be a fairly easy matter to include the resistors, properly in series, at the last device wired to each zone. Problems arise over time, though, when alarm panels need to be replaced. If the new panel requires a different resistor value than the old panel, and the resistors are now buried in the finished walls, what can you do? Because of this, a lot of installers started putting the EOLR at the panel, instead of at the End of Line where it belonged. This works, but doesn’t provide the same protection from wire tampering that having the resistor at the end of line does, as shown above. Alarm manufacturers, responding to this trend, began allowing some, if not all, hardwired zones to be used without an EOLR. The Vista-21iP allows zones 2 - 8 to be programmed as either EOL, Normally Closed, or Normally Open. They also allow Zone Doubling, and Double Balanced zones, but we will not discuss those options here. Zone 1 must use an EOLR, in part because it supports 2-wire smoke detectors. Smokes, like most life safety devices, are Normally Open, and require a resistor so that the alarm panel can tell the difference between a short and an open on the zone. Zones programmed as Fire or Carbon Monoxide provide an Alarm on short, and a Trouble on open and must be wired with a resistor in parallel on the zone. 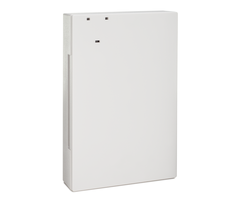