What Are The Wiring Options for a Door or Window Sensor?

The wiring options for a door or window sensor are governed by a number of criteria. Whether the contacts being used are Normally Open or Normally Closed, whether the control requires a resistor, the nature of the door or window to be protected. Here, we'll take a look at some common uses.

First of all, since we're talking about wiring, we'll assume this is a hardwired zone on an alarm panel, or an expansion module. It is possible to wire a contact to an auxiliary input on a wireless sensor, but we're not going to discuss that here. Although, the basics of wiring are the same whether you're wiring to a panel, a module, or a wireless contact.

End-of-Line Resistors, hereinafter referred to as EOLR, are resistors that may be required by the panel or expander in use. They may also be optional. The purpose of EOLRs is to supervise the wiring in a zone circuit. A zone on an alarm panel works much like a multi-meter. It uses Ohm's law by applying a known amount of voltage and current (a very small amount) to each zone. Ohm's law tells us that if we know the amount of voltage and current in a circuit, we can then determine the amount of resistance (V/I = R). If you know the resistance and voltage, then you can determine the amount of current, and so on. When an alarm panel requires that an EOLR be used, the panel has been programmed to monitor the zone for a specific resistance value within a certain tolerance. Usually within a few hundred Ohms higher or lower. If it doesn't see the proper value, within the specified tolerance, it will indicate that the zone is faulted.

When one or more NC door or window sensors are wired in series with a resistor at the end-of-line, and all of the door or window contacts are closed, then both current and voltage are able to flow through the zone, passing through the EOLR. The alarm panel is able to see the resistor and determine that it is of the correct value, within tolerance. When any one or more of the doors or windows are opened, the circuit is broken, current and voltage are no longer flowing, and the panel can no longer see the EOLR. This is how the panel determines whether the zone is faulted or open.


Normally Closed Contacts, Wired in Series with an EOLR:

If someone tries to tamper with the zone by placing a short across the zone wires somewhere between the zone terminals and a contact in the circuit, this also stops the flow of current and voltage. Electrical current, like water, will take the path of least resistance. It's easier to travel through a piece of wire than to travel through a resistor. Since the zone can no longer see the proper resistance, because voltage and current are no longer flowing through the EOLR, this tampering will also cause the zone to show a fault or open condition, even though the problem is actually a short circuit. Most burglary zones don't distinguish between a short and an open when an EOLR is in use. The zone is either normal or faulted. The possibility of tampering is why having the resistor at the end of the zone wiring, rather than at the panel, is so important. If the EOLR is wired at the panel, it cannot prevent this kind of tampering.

Window and door sensors are usually NC devices, also called Form A. Some burglary, and all life-safety sensors, are available as NO, or Form B, and then some sensors have an option to wire them either NC or NO. This is known as Form C. When working with window and door sensors, you want to be sure which type of contact you are working with, as this determines how your EOLR should be oriented. In most cases, all of the sensors on a single zone should be the same type, Form A, Form B, or Form C (but with all contacts wired in the same orientation).

Normally Open Contacts, wired in Parallel with an EOLR: 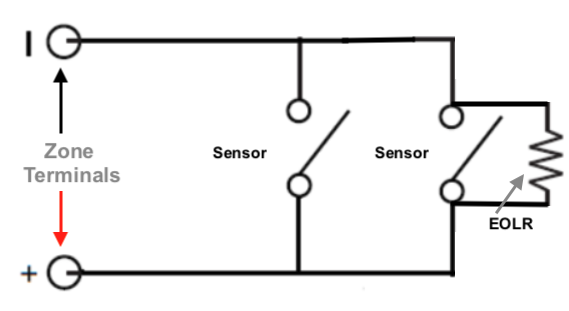 If you have a multimeter, you can determine the type of contact you have by setting the meter to read Ohms or continuity. Most meters that have an option to meter specifically for continuity will provide a tone when continuity, or a short, is sensed. In the image below, a multimeter is shown with the dial set to check for Ohms, Diode, Continuity (the symbol that looks like a WIFI symbol on its side), or Capacitance. Having the meter leads plugged into the correct ports is also important. The Black meter lead should always be in the Common port, and for this test, the Red meter lead is plugged into the port for Volts, Ohms, Diode, Continuity, Hz, and Capacitance. 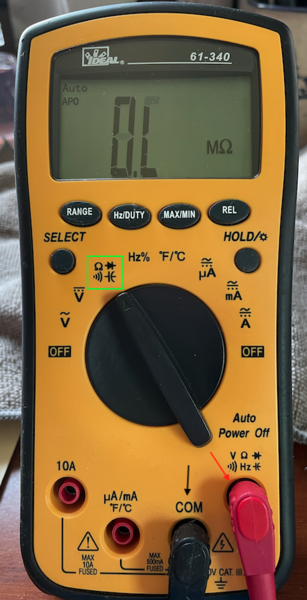 The image below shows that after setting the dial to the proper setting, pressing the Select button allows the user to toggle through the options for that setting. We'll be checking continuity, so we have the option for Continuity selected (the sideways WIFI symbol). In this configuration, a short circuit (continuity) will be indicated with a tone from the multimeter. OL stands for Open Loop. This indicates that either the leads are connected to nothing, or they are connected to a circuit that is in an open state.

In addition to a tone from the meter, the Ohm reading will usually zero out when reading a short circuit. In some cases, the Ohm reading may not go completely to zero, or it may fall quickly to zero from another reading. Variations in multimeters can account for this. Also, there is resistance in just about everything, the leads themselves, your fingers, so holding the leads shorted in your hand may not result in a 0 Ohm reading, but will cause a tone to sound if enabled. 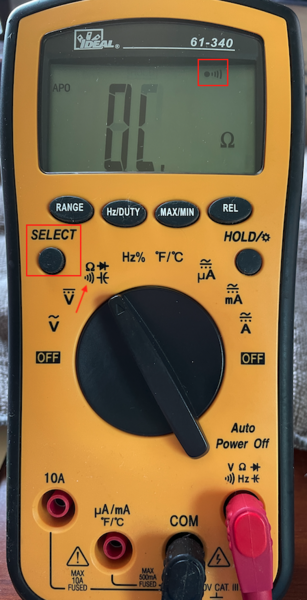 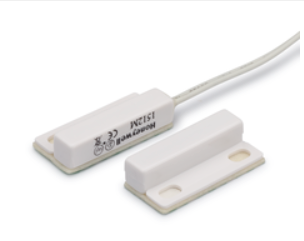 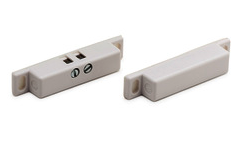 Normally Closed with No EOLR

Another wiring option is to wire contacts Normally Closed with No EOLR. Not all panels will accept this option, and using NC with no EOLR leaves your zone open to the potential for tampering as explained above. When the option for Normally Closed with No EOLR is available, it is usually a programming question when dealing with an alarm panel, and most likely a dip switch or jumper setting when dealing with an expander. At the panel level, this option is usually available on a per-zone basis, while on an expander, it may be an all-or-nothing proposition. Where either all zones on the expander require a resistor or none of them do. Refer to the installation instructions for your panel and/or expander to determine if this option is available for you. Panels that definitely give you this option, with the exception of any 2-wire smoke zone, are the Honeywell VISTA Panels, newer Honeywell 4219 Zone Expanders, and DSC PowerSeries NEO panels. This is by no means an exhaustive list.

When wiring NC without an EOLR, you still need to wire in series if multiple contacts are used on a single zone. If you have a number of NC contacts in the field, and you wire them all back to the panel to hook up to the terminals for a single zone, rather than in series, and then connect more than one of them to the single zone input, instead of the zone showing a fault when any one (1) contact is opened, it will require that all contacts connected to that zone be opened before the panel will recognize that a fault condition exists. This is definitely not what you want!

Normally Open with no EOLR

It's important to know that the logic the panel uses to treat a life-safety zone differently from a burglary zone is determined by the Zone Type, Sensor Type, or Sensor Group used when programming the zone. The terminology changes depending on the type of panel used. On a VISTA panel, for example, you may program a wired zone (2 - 8) as Zone Type 09, Fire Without Verification, then set it as Normally Open and connect a fire sensor to the circuit. If one of the wires connecting that sensor to the alarm panel gets broken or disconnected, the panel will have no way of knowing that. The alarm panel says, "You said it was supposed to be open, and it's open, so I'm happy." The end-user would never know there was a problem with that sensor, or sensors until a fire event occurred and no alarm was reported. And unfortunately, that type of error can have deadly consequences. So, unless you have the rare situation of using a burglary or other non-life-safety sensor that is Normally Open, don't use this configuration.