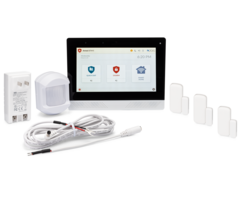 The 2GIG Edge 3-1 Wireless Kit with AT&T LTE is a complete security system kit made for a smaller home or an apartment. This 3-1 kit comes with a 2GIG Edge System with built-in AT&T LTE, three (3) VERSA-2GIG Door and Window Sensors, One (1) 2GIG PIR1e Motion Sensor, and a Honeywell LT-Cable.

Undoubtedly the most interesting and most important component of this 3-1 security system kit is the 2GIG Edge Alarm Panel. This system boasts a modern and clean design, complete with fluid controls and seamless navigation from its seven-inch (7") touchscreen. This is an incredibly versatile system, and you will feel perfectly at ease operating it, whether you are extremely familiar with alarm systems, or the 2GIG Edge happens to be your first one ever.

For wireless sensor support, the 2GIG Edge has one-hundred (100) available wireless zones. We have gotten you started by providing three (3) VERSA-2GIG Door and Window Sensors and one (1) 2GIG PIR1e Motion Sensor with the system. Expansion is available using 2GIG 345 MHz Sensors, one-way Honeywell 5800 Sensors, and encrypted 2GIG eSeries Sensors. Interestingly, the Edge does not have its own signature lineup of security sensors, as it solely relies on backwards compatibility for sensor support. 2GIG has not provided any indication that they intend to release a signature lineup of sensors exclusively for use with the 2GIG Edge Security System. In addition to the Edge Panel and the wireless sensors, we have also included a Honeywell LT-Cable for connecting the system with its included transformer.

This system kit is ready to go as far as alarm monitoring service is concerned. Inside this 2GIG Edge is an AT&T LTE Communicator that is used for connecting with the Alarm.com servers. It is important to note that Alarm.com requires cellular connectivity, so getting the system's cellular communication path up and running is essentially mandatory if you intend on getting the system monitored. The panel also has built-in WIFI, and although WIFI connectivity isn't required like cellular service, most cellular alarm monitoring plans also include WIFI at no extra charge. And since you typically find WIFI in almost every home and business, the vast majority of Edge users ultimately set the system up on both WIFI and cellular, which is called dual-path connectivity. This is a great option because even if one communication pathway goes down, the other will still be available to keep the system connected.

We definitely recommend choosing a monitoring plan that includes access to Alarm.com, as it is very important for getting the most out of your 2GIG Edge. Alarm.com is a remote interactive service platform that you can access to arm and disarm your system, check your system's current status, control programmed smart home automation devices, view the live feed for Alarm.com Cameras, and much more. If you are looking for a good cellular monitoring plan to use with your 2GIG Edge, then you should strongly consider the Gold and Platinum Level Plans from Alarm Grid. You can choose between a Self Plan or a Full Plan with central station service, depending upon your needs. More information on our monitoring plans can be found here.

2GIG went all out in making sure the Edge was a powerful entity in the home automation sphere. This is the very first security system sold by Alarm Grid to offer integrated Z-Wave Plus V2 functionality. This is often referred to as Z-Wave 700-Series technology. By pairing certified Z-Wave 700-Series devices with the 2GIG Edge, your peripherals will obtain the longest battery life, the furthest wireless range, and the strongest wireless security protection available. And like the other Z-Wave generations before it, the 700-Series is fully backward compatible with older Z-Wave equipment. In other words, if you have an existing Z-Wave network, then you should have no trouble integrating it with your new Edge System.