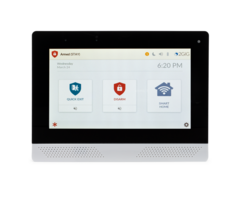 The 2GIG Edge with AT&T LTE is a state-of-the-art security panel from Nortek Control. This feature-loaded system is great for anyone needing top-quality protection for their home or business. You will also love its sleek and modern design that allows it to fit in nicely with any décor.

Starting with the basics, the 2GIG Edge Alarm System is controlled using a 7-inch LCD touchscreen. It takes a bit of practice to learn where everything is so that you can begin programming. But once you do, then you will have no trouble setting up your system to your liking. This can include setting up the system's four (4) Smart Area Partitions (returning from the 2GIG GC3) and up to 100 different users, each with their own user code.

There are 100 wireless zones available on the 2GIG Edge. This is plenty of zones, even for a larger home or office. You shouldn't even come close to running out of zones in most installations. You have a few options of wireless sensors for the Edge. The system actually has the same wireless sensor compatibility as predecessor 2GIG Panels, the 2GIG GC2e and 2GIG GC3e. This means that the 2GIG Edge can support 2GIG eSeries Encrypted Sensors, and legacy 345 MHz wireless sensors from the 2GIG 345 MHz Series and the Honeywell 5800 Series. It is currently unknown if 2GIG plans to release a new sensor lineup of devices exclusively for the 2GIG Edge. For image sensor support, the 2GIG Edge works with the 2GIG IMAGE3*.

Inside each 2GIG Edge System is an integrated WIFI card and an LTE cellular communicator for connectivity with Alarm.com. You must keep in mind that Alarm.com requires any system connecting with their servers to have an active cellular communication path enabled. This means that you will need a monitoring plan that includes cellular connectivity if you want to get the 2GIG Edge monitored. Some plans to consider include the Gold and Platinum Level Plans from Alarm Grid. Check out this guide for more information. And if you have WIFI in your home or office, you can also connect the Edge to that local network to make it a dual-path system. That way, even if one path (cellular or WIFI) goes down, the Edge can stay connected with Alarm.com across the other pathway. If LTE cellular signal requires a boost in the area where the panel is mounted, the 2GIG ANT5XL-GC3 antenna can be added.

Having the cellular communicator integrated inside the 2GIG Edge is a bit of a double-EDGED sword. The good news is that it already comes inside the panel so you don't have to buy one separately. You also won't have to install it inside the panel. This is really great, except that if something goes wrong and you need to replace the communicator, then you will actually need to replace the entire panel. There's no way to just take out the cell module and insert a new one. Make sure to be very careful when dealing with the panel's cellular radio to avoid any issues! Please note that this is the AT&T LTE version of the 2GIG Edge. A Verizon LTE version of the 2GIG Edge is also available if that network works better in the area where the panel will be used. You cannot switch cellular service providers later on, so choose carefully between AT&T and Verizon.

One other module inside the 2GIG Edge that you cannot replace is its Z-Wave Plus controller. This is what allows you to enroll Z-Wave automation devices with the system, including lights, door locks, smart thermostats, and much more. The Edge is certified by the Z-Wave Alliance for Z-Wave Plus V2 700-Series. One rather noteworthy fact about the Z-Wave controller inside the 2GIG Edge is that it supports the Z-Wave S2 Security Protocol. This is very important if you want to keep your smart home automation network as secure as possible. More information on the S2 Security Protocol for Z-Wave Plus can be found here. Keep in mind that only Z-Wave Plus devices that support S2 can be set up for this type of security. Older classic Z-Wave devices and many Z-Wave Plus devices don't use S2 and will instead enroll with the Edge on the S0 Protocol.

By setting up a Z-Wave smart home network around your 2GIG Edge Security System, you can make your life more convenient and save money on energy expenses. Paired Z-Wave devices can be controlled locally at the 2GIG Edge Alarm Panel, which is perfect if you are on-site and nearby the system. You can even create and execute entire Z-Wave scenes locally at the panel. But even more importantly, if the Edge System is monitored and set up with access to Alarm.com, then you can use the Alarm.com Mobile app on your Android or iOS device to control your Z-Wave devices from anywhere in the world. Alarm.com also allows you to arm and disarm your system, check its current status, and view live camera feeds if you have them set up. Make sure that your monitoring plan includes access to Alarm.com for this functionality and convenience! Alarm.com connectivity also opens the door for the 2GIG Edge to integrate with a nice selection of smart voice assistants, including Google Assistant, Amazon Echo, Amazon Alexa, Siri Shortcuts, and more!

And you can't discuss the 2GIG Edge without at least mentioning its many awesome features and capabilities. The system offers a laundry list of eye-catching features that are sure to change how you think about home and small business security. Some of the features include facial recognition for disarming, automatic Bluetooth disarming with your smartphone, an internal glass break detector with advanced audio analytics for false alarm prevention, a front panel camera for disarm photos, 2-way voice capabilities, one-touch arming, panel live-streaming for compatible Alarm.com Cameras, a built-in piezo sounder, Chime and Voice functionality, two (2) wired zones, emergency panic buttons, a wired bell output, two (2) open-collector outputs, and much more! Firmware updates for the 2GIG Edge can be sent down over-the-air (OTA) from Alarm.com, or a USB drive can be used.

The 2GIG Edge receives primary power from a 14VDC, 1.7A transformer that comes included. Wiring is not bundled, so you must supply your own. Any standard alarm wiring will do, or you can use a Honeywell LT-Cable for added convenience. 2GIG also makes their own cable specifically for use with the Edge under the SKU of 2GIG-EDG-CBL. For backup power the 2GIG Edge comes with a 2GIG-EDG-BATT Rechargeable Battery. This is a lithium-polymer backup battery that provides at least 24 hours of backup power. The system has dimensions of 7.5"L x 5.625"W x 1.0D, making it incredibly sleek and slim. It weighs 1.39 lbs. Mounting hardware is included. Some certifications for the 2GIG Edge include UL & cUL Listed, SIA CP-01 Compliant, among many more. Also note that the 2GIG Edge supports both the 2GIG CP-DESK Table Mount and Desk Stand and the 2GIG PAD1-345 Touchpad Keypad. It also has its own signature touchscreen keypad called the 2GIG Edge Remote Keypad.

*Note that the only image sensor compatible with the 2GIG Edge is the 2GIG IMAGE3. However, the Edge will not support this device until a 2GIG XCVR3-GC3 is added. In panel Firmware Version 3.1.1.016 an issue where captured images couldn't be uploaded to Alarm.com was corrected and once the panel has been updated this feature functions as intended.