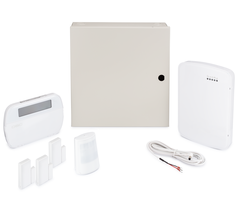 The centerpiece of this kit is the DSC HS2032NK 32-Zone PowerSeries NEO System. This is a hardwired system that boasts some impressive features. However, its 32-zone restriction makes it really only suitable for smaller homes and businesses. Another thing to keep in mind is that the panel itself only has eight (8) hardwired zone terminals. One or more DSC HSM2108 Expansion Modules are needed if you want to use additional hardwired sensors. Another option is to just use wireless PowerG Sensors, which are easier to install.

The bundled DSC HS2LCDRF9 N NEO Keypad is what enables the system to support PowerG Sensors. This is thanks to its integrated PowerG Transceiver. You can start enrolling PowerG Sensors after the keypad has been installed and addressed with the system. Keep in mind that you are restricted to only 32 zones total. This includes both hardwired sensors and wireless PowerG Sensors. We have included three (3) DSC PG9303 PowerG Contacts and one (1) DSC PG9914 PowerG Motion with the kit to get you started. All PowerG Sensors can communicate from up to 2km away from the keypad in open air. They use 128-bit AES encryption for enhanced wireless security and protection against any RF jamming techniques.

The included DSC TL880LEAT N AT&T LTE & IP Communicator is also an important component of this kit. This accessory allows the system to communicate with the Alarm.com Servers for fast and reliable monitoring service. Dual-path communication is great, as the system will have two distinct communication paths backing each other up. Both IP and cellular LTE are quite fast, and it's always smart to have multiple communication paths. Since this is an LTE communicator, it will work with the system well into the very distant future. AT&T is expected to keep their LTE network in service for many years to come. This makes this communicator a great long-term solution for your security panel. Remember that you must have a monitoring plan that includes access to ADC to activate.

Being able to access Alarm.com offers many advantages in its own right. This is an interactive monitoring and automation platform that makes it easier to control your system. You can access Alarm.com from pretty much anywhere using the website or the Alarm.com Mobile App for Android and iOS devices. Once you have logged-in, you can arm/disarm your system, check its current status, control Z-Wave devices, view programmed Alarm.com Cameras, and more. The DSC TL880LEAT N also includes a built-in Z-Wave controller, making it super easy to get started with smart home automation for use with Alarm.com.

This kit also includes a Honeywell LT-Cable, which connects the system with its plug-in transformer (not included) for providing power. While the kit includes the LT-Cable, it does not include a backup battery. This is something you will definitely want to add so that the system can remain running in the event of an electrical outage. The UltraTech 1240 is a common battery to use. You might alternatively use an UltraTech 1270 if you determine that your system requires additional power. Keep in mind that you must replace the battery every three (3) to five (5) years.