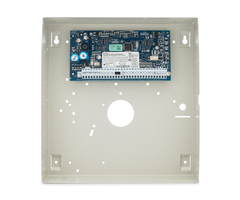 The DSC HS2032NK PowerSeries NEO Security System is a wired panel with support for up to 32 zones. Only eight hardwired zones come built into board. You can add additional wired zones with expansion modules or add a wireless transceiver to use wireless zones. Buy a DSC PowerSeries NEO here.

The DSC PowerSeries NEO HS2032NK with support for up to 32 zones is designed for medium to large homes and smaller commercial locations. It supports up to four (4) partitions that can each be controlled by a unique set of user codes. A wireless transceiver is needed to use PowerG Sensors.

There are also only eight (8) integrated hardwired zones built into the HS2032NK board. If you want to increase the number of wired zones, then you will need to add one or more DSC HSM2108 Expansion Modules. Each added module increases the number of hardwired zones by eight (8). You also have the option of adding a wireless transceiver module to use DSC PowerG Wireless Sensors with the system. We strongly recommend using a DSC HS2LCDRF9 N NEO Keypad if you decide to do this. That device serves as both a keypad and as a wireless transceiver. You will need a keypad anyway to control the system. PowerG Sensors can be used from up to 2km away with direct line of sight.

You will also need to add an alarm monitoring communicator to your DSC PowerSeries NEO System. This is the device that allows the system to send out signals to the Alarm.com Servers. These modules are dual-path and communicate across IP (hardwired ethernet) and cellular networks. If one communication path goes down, then the other path will be there to back it up. There are both AT&T LTE and Verizon LTE options available. These communicators also double as Z-Wave Plus controllers for operating your smart home devices from Alarm.com. Remember, you will need a compatible alarm monitoring plan to activate the communicator.

There are other alarm systems you might consider if you are looking for PowerG support. The most notable is the Qolsys IQ Panel 2 Plus. This is a wireless all-in-one system, meaning that it is much easier to install and configure than a PowerSeries NEO System. The IQ Panel 2 Plus requires fewer add-ons, and it is much more ready to go right out of the box. This wireless control panel comes with support for up to 128 wireless zones. A PowerG Transceiver and a legacy receiver (319.5 MHz, 345 MHz, or 433 MHz) both come built-in. The system also comes complete with an integrated AT&T or Verizon LTE Communicator and a WIFI card for reliable monitoring service and connectivity with Alarm.com. Users should only choose a PowerSeries NEO System instead if they really want to use a hardwired security system.

The DSC PowerSeries NEO HS2032NK supports up to 71 user codes plus a single Master Code. The Event Log can store up to 500 different events. The system features a bell output and siren supervision. It is also SIA CP-01 compliant. We recommend using an UltraTech 1240 for battery backup. Primary power is provided from a 16.5VAC, 40VA transformer (not included). A metal cabinet enclosure comes included. 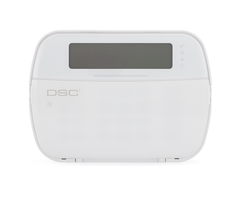