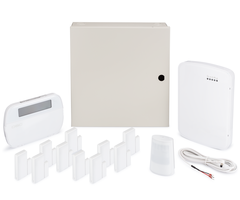 The NEO-2064-PK10-ENC-AT is an alarm system starter kit with all you need. It includes a 64-zone DSC PowerSeries NEO System, a keypad with integrated PowerG Transceiver, an Alarm.com AT&T LTE & IP Dual-Path Communicator, 10 PowerG Contacts, a PowerG Motion, and an LT-Cable. Buy the kit here.

The DSC HS2064NK is a hardwired alarm control panel with support for up to 64 zones. This is a very powerful system that is ideal for larger homes and small businesses. However, you must keep in mind that there are only eight (8) hardwired zones built into the board. In order to use additional hardwired zones, you will need to get at least one DSC HSM2108 Expansion Module. Every HSM2108 Module you add will add eight (8) new zones.

Keep in mind that you do not have to use hardwired sensors with the DSC PowerSeries NEO. The panel can also support wireless PowerG Sensors. This is thanks to the DSC HS2LCDRF9 N NEO Keypad we have bundled with the kit. This keypad features an integrated PowerG Transceiver that is used for communicating with PowerG Sensors. These sensors offer a wireless range of up to 2km in open air, as well as military-grade 128-bit AES encryption for preventing wireless takeover attempts. This kit features ten (10) PG9303 Door/Window contacts and one (1) PG9914 Motion for you to get started with PowerG Wireless Sensors. Just keep in mind that both wired and wireless sensors count towards the 64 zone limit.

Another important component of this kit is the DSC TL880LEAT N Communicator. This is an Alarm.com Dual-Path Communicator that works across the AT&T LTE Network and a hardwired ethernet connection. If one path goes down, the other will still be there to keep the system communicating properly. By activating this communicator with an appropriate alarm monitoring plan, you will be able to control the system from Alarm.com. This is an interactive monitoring and automation platform that you can use to control your system from a website or mobile app. You can access Alarm.com to arm/disarm, check status, control Z-Wave devices, and more. Speaking of Z-Wave, the communicator doubles as a functional Z-Wave Plus Controller. This will allow you to start building a Z-Wave network around the system.