Can I Trigger a Z-Wave Device When a Door Sensor is Activated?

Yes, you can trigger a Z-Wave device when a door sensor is activated. This is done using rules and smart scenes. Depending on the system, you may be able to configure this locally at the panel. In other cases, you might be required to set this up through an interactive service platform. 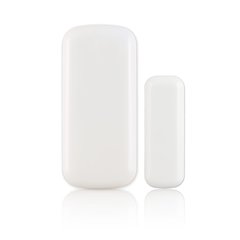 Many security systems include built-in Z-Wave controllers so that you can pair Z-Wave home automation devices. These Z-Wave devices can be included with smart scenes so that they activate automatically based on a schedule or with predetermined system events. On some systems like the Honeywell Lyric Controller, it is possible to create local smart scenes at the panel. This can be used to have a Z-Wave device activate when a door sensor is faulted. But more often than not, you will be setting this up through an interactive platform like Total Connect 2.0 or Alarm.com. For the Lyric in particular, you will lose your ability to program scenes locally once the system is set up for remote automation control through TC2.


There is a slight difference between the way Total Connect 2.0 and Alarm.com handle automation. In TC2, rules and and scenes are simply combined into smart scenes. You will establish triggers (such as a sensor faulting) to activate devices within the smart scene. A setup wizard will guide you through the smart scene creation process.

But with Alarm.com, rules are used to set up automation events. Rules are either event-triggered, video based, or thermostat based. Once you've selected the type of rule to be created, you'll see all the options available for programming the rule. In the following example, we chose to automate Lights. Each rule can only be enabled for one type of device, such as Lights, Locks, Water Valves, etc. Based on when the upstairs motion activates, we want to turn ON the Lamp, but only if it's after Sunset. Now we never have to walk into a dark room.

To break this down further, it is important to understand what exactly we mean by rules and scenes. A rule is a command on a security system that causes an action to occur when a certain event takes place. This event could be something like a sensor being faulted, a certain time of day, the system being disarmed, or an alarm on the system. Meanwhile, a scene is a set of predetermined actions that are triggered simultaneously. These actions can include Z-Wave device operations, as well as system operations, such as arming and disarming. Remember, TC2 only requires you to create a smart scene, which includes setting the trigger for the scene to occur.

But to have a Z-Wave device automatically respond when a door sensor is faulted on Alarm.com, you will need to create a rule. The rule will tell the scene to occur when the door sensor is faulted. The scene will be the actual action of the Z-Wave device. By using a rule and a scene together, you can achieve the desired outcome. For example, you might have a rule that tells a certain scene to occur when your bedroom door is opened and the associated door sensor is faulted. That scene could, for example, have the Z-Wave light in your bedroom turn on automatically. There are many possibilities here, and you can even have the single scene include multiple Z-Wave devices, if desired.