How Can I Get My Wireless Smokes to All Go Off at the Same Time? 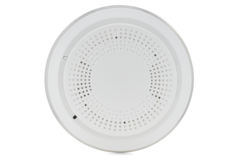 The One-Go-All-Go feature allows a user to program their smoke detectors so that if one smoke is activated, all of the other smoke detectors that are programmed with the system will also activate. This can be useful for ensuring that everyone in the building will hear the fire alarm and evacuate as quickly as possible. Unfortunately, most wireless smoke detectors are not capable of utilizing this feature.

One notable exception to this general rule is the Honeywell SiXSMOKE Wireless Smoke and Heat Detector. This smoke is strictly for use with the Honeywell Lyric Controller. When multiple SiXSMOKE devices are set up, they can be programmed so that if one goes off, the other SiXSMOKE sensors will activate as well. Only SiXSMOKE devices can be a part of this chain, and any other smokes that are set up with the Lyric Controller will not automatically activate. The SiXSMOKE is the only wireless smoke detector sold by Alarm Grid that supports the One-Go-All-Go function.

In most cases, if a user wants to use a One-Go-All-Go setup, they will need to use hardwired 110 volt smoke detectors. These smokes are generally interconnected, and if one device activates, all of the others will go off as well. Unfortunately, these smokes will not interface with a security panel directly. In order to connect them with your setup, you can use a takeover module, such as the Encore FireFighter FF345. This module will connect with your panel as a wireless device, and it will listen for the sound of a hardwired smoke that has been activated. If such a sound is detected by the FF345, it will activate a fire response in the same way that a smoke that has been integrated with a security system would.

Note: After writing this FAQ, we have since learned that the DSC PowerG Wireless Smoke Detectors also support the One-Go-All-Go feature. This is perfect for owners of the Qolsys IQ Panel 2 Plus who want to achieve a complete smoke detector network for their homes and businesses.

The video below will help you with programming an FF345 to a Honeywell Lynx Touch.