How Do I Add a Siren to the Qolsys IQ Panel 2 Using the Hardwire 16-F?

Adding a Siren to the Qolsys Hardwire 16-F

The Qolsys IQ Hardwire 16-F is a wired to wireless converter module that allows hardwired sensors to communicate with the IQ Panel 2 System wirelessly at a frequency of 319.5 MHz. It features 16 zone terminal pairs for hardwired sensors, in addition to a wired tamper input. What's unique about the module is that the 16th zone is an end-of-line resistor supervised zone that can support Normally Open 2-wire smoke detectors.

One great aspect of the Hardwire 16-F is that it essentially serves as a wireless relay between the IQ Panel 2 System and the hardwired siren. This means that a user does not have to install an external relay to use a hardwired siren with the module. Instead, the Hardwire 16-F will automatically apply power to the siren when an alarm occurs and cut power when the alarm is silenced.

Applying power to the siren will have it start sounding, while cutting power will stop the noise. The Hardwire 16-F gets its power from its plug-in transformer and its backup battery. The siren output for the module can provide up to 500 mA of power to operate the siren. As long as the siren configuration does not exceed this power load, no external power supply will be needed.

Please note that the Qolsys IQ Hardwire 16-F will only serve as a wireless siren relay for an IQ Panel 2 System that is RF PIC Version 11.1.4 G2 or higher. Panels have a lower version cannot be upgraded. The user will need to replace the system with a new one if they want to use the IQ Hardwire 16-F as a wireless siren relay. You can check the RF PIC Version for your IQ Panel 2 by clicking the small grey bar at the top of the main screen. Then choose Settings > Advanced Settings > Installer Code (1111) > About > Hardware > RF PIC Version. 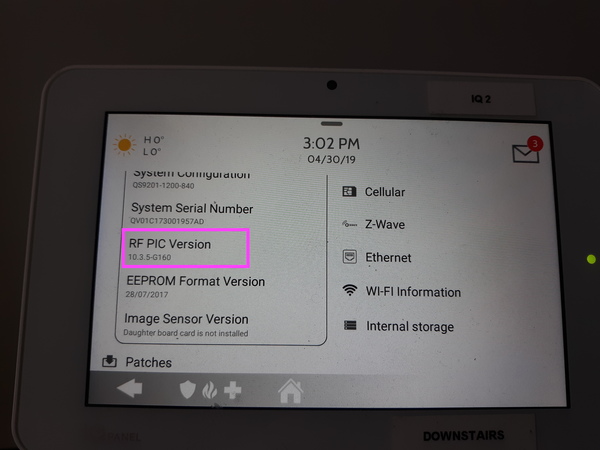 1. Program to panel. You must first program the Hardwire 16-F to the panel. This is very simple, and the module learns in like any wireless sensor. Start from the main screen of the IQ Panel 2. Press the small grey button at the top. Then choose Settings > Advanced Settings > Installation > Devices > Security Sensors > Auto Learn Sensor. The IQ2 will enter into its auto-enrollment mode.

Next, turn your attention to the Qolsys IQ Hardwire 16-F. Press and hold the EOL Learn button. Release it after two seconds. The EOL CAL light will illuminate, which indicates that the module is now in learn mode. Open and close the tamper zone on the module to learn it in. If you are not using a tamper switch, you must place a wire jumper across the tamper terminals. In that case, remove the short, and then replace it to fault the tamper input. The panel should recognize the module and allow you to adjust the settings.

Then follow the prompts on the IQ Panel 2 to learn in the module. You should set the Sensor Type as a "Hardwire Translator". Press the Add New button when you have finished. The module will be enrolled with the system. Then press the picture of the house at the bottom to return to the main screen. Any changes will be saved.

For safety, you should power down the Hardwire 16-F before attempting to wire. To do this, disconnect the transformer and backup battery. You can power the module back on after completing the connections listed below.

The following connections will be made: 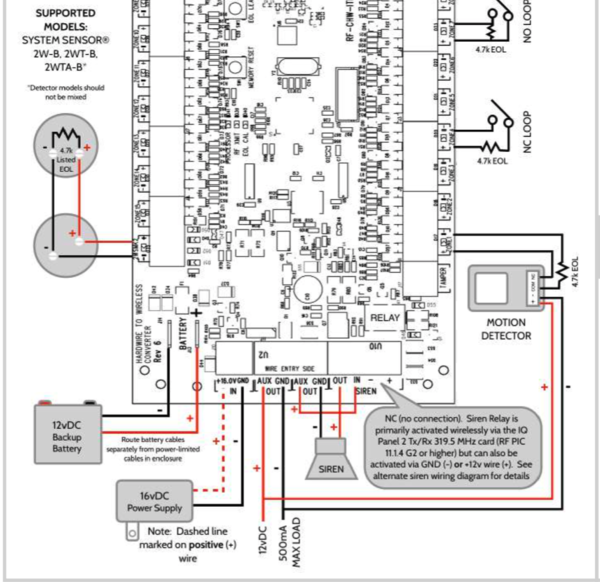 3. Test the siren. The Qolsys IQ Panel 2 System has a test mode for testing sirens. To access the menu, start by pressing the small grey bar at the top of the main screen. Then choose Settings > Advanced Settings > Installer Code (default 1111) > System Tests > Panel Test.

To test the siren, scroll down to the Sirens option, and choose Run. Make sure the siren operates as it should. If it doesn't, check your wiring and try again. You may also try rebooting the system and re-testing.

Click Here to Learn More
Julia Ross
August 12, 2020 17:57
Qolsys has verified that the Siren Test, performed from the panel should also activate the Siren output on the IQ Hardwire 16-F.
Julia Ross
August 11, 2020 22:15
Rob, I'm checking with Qolsys tech support to be sure that it should be, but in the interim, are you able to arm the system (making sure to put it on test with the monitoring station first) and then set off an audible burglary alarm as a test of the 16-F siren? Regardless of whether or not it should sound for the siren test (and I will confirm that one way or the other) it should definitely provide an output for any audible alarm.
Rob Koenig
August 08, 2020 17:15
I have my external siren hooked up correctly to the Hardwire 16-F. I have checked the wires several times to confirm. When I do a siren test on the IQ2+ panel there is no output to the external siren. The panel siren works fine. I rebooted the panel just to be sure. I have also gone down to the 16-F panel and no relay is clicking during the siren test and there is no output 12VDC to the siren across the OUT and GND terminals. The jumper wire is correctly placed. If I understand the system correctly when I do a siren test from the IQ2+ panel I should hear the relay and see 12 VDC appear across the two terminals going to the siren on the 16-F .