The L5100-WIFI module makes it easy to connect to the internet network without the use of an Ethernet cable.

Open the Lynx Touch L5200 control panel to separate the front from the back by pressing the top 2 tabs with a small flat head screwdriver. Release one tap at a time.

If the L5200 is powered up, once the panel is opened a tamper beeping will begin. Press the home button to silence the beeping.

Before installing the L5100-WIFI module, make sure to power the L5200 panel down. Remove the LT Cable or unplug the transformer from the outlet and unplug the backup battery.

Before powering the panel back up, write down the MAC ID and CRC numbers off the L5100-WIFI module. The MAC ID number is always a 12 (twelve) digit number and starts with 00-D0-2D with 6 (six) digits after. The CRC number is a 4 (four) digit combination of numbers and letters. The last 6 (six) digits and the entire 4 (four) number/letter combo is what is needed to provide a monitoring provider. The MAC ID and CRC numbers can also be found on the side of the box it came in.

Power the Lynx Touch L5200 back up by first plugging in the LT Cable or plug the transformer into the outlet, then plug the battery back in. Close the panel front to back and the panel will auto power up. The top banner will show red system stand by. Once green ready to arm displays, there should be a WIFI indicator icon on the home. This confirms the panel sees the WIFI communicator. Users can now connect to the internet network.

Installing a L5100-WIFI module allows users to connect to a central monitoring station and Total Connect 2.0. 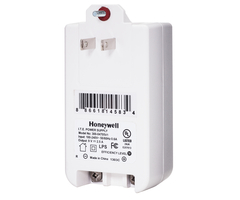