How Do I Bypass a Zone on the 2GIG Edge?

You can bypass a zone on the 2GIG Edge by starting from the main screen, clicking the settings icon (the gear) in the bottom-right, entering the Master Code or Installer Code, choosing Bypass Sensors, finding the programmed sensor you want to bypass, and clicking its toggle button to green. 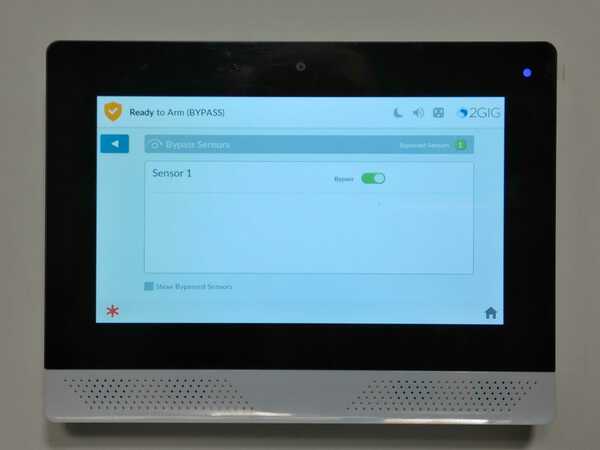 When you bypass a zone, you are telling the system to ignore the sensor temporarily, until it is un-bypassed at a later time. This can be a good alternative to deleting a zone entirely and then having to reprogram it from scratch. The bypassed sensor will remain inactive while bypassed, and even if you fault the sensor, nothing will happen on the 2GIG Edge System. When at least one (1) zone is bypassed, you will see the system in a unique state called "Ready to Arm (BYPASS)", and it will remain in that state until you either arm the system with the sensor(s) bypassed, or you "un-bypass" every bypassed sensor so that there are no bypassed zones on the system.

By default, disarming the system will automatically un-bypass all bypassed sensors unless the "Auto Unbypass for Manual Bypass" feature is disabled in Q118. Please note the system will not allow you to bypass any zone programmed as a life-safety sensor, such as smoke detectors and CO detectors. These sensors will not show up in the list of zones that can be bypassed.

Complete the following steps to bypass sensors on the 2GIG Edge:

3. Return home. After you have properly bypassed sensors according to your needs, you can press the picture of the house in the bottom-right corner to return to the home screen. Assuming there are no actively faulted sensors, the system should be in a "Ready to Arm (Bypassed)" state. When you arm the system, any bypassed sensors will remain inactive on the system, and they will not be able to trigger an alarm when activated. Remember, any sensors that ARE NOT bypassed will still be active, and they will still trigger a system response if they are activated. This can include system alarms. Only sensors that are currently bypassed will be ignored by the system.

4. Un-Bypass Sensors. If you ever need to un-bypass a sensor, then return to the Bypass Sensors Menu, find any bypassed sensors that you want to make active, and toggle their switch from green to grey. After you finish, you can press the picture of the house in the bottom-right to return home. Remember, when the switch is green, the sensor is bypassed and ignored by the system. When the switch is grey, the sensor is not bypassed, and it is active and able to trigger a system response. If you have at least one zone bypassed, then the system will be in a "Ready to Arm (Bypassed)" state. You will only get the regular "Ready to Arm" state if no zones are bypassed and no zones are faulted.