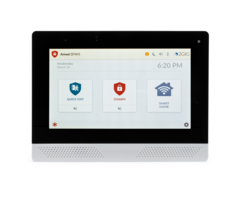 The 2GIG Edge with Verizon LTE is a feature-rich security system that makes a great addition to any home or business. It has 100 wireless zones, 100 user slots, Z-Wave Plus V2 700-Series w/ S2, facial recognition and much more. It comes dual-path ready. Buy the 2GIG Edge w/ Verizon LTE here.

The 2GIG Edge with Verizon LTE offers top-of-the-line security and protection for any home or business. This alarm system comes jam-packed with all the resources and tools that you need for protection and making your life more convenient. You can't go wrong with this sleek and modern panel!

The 2GIG Edge System is operated with a 7-inch LCD touchscreen that is sure to turn heads when seen in your home or office. Those who are new to security systems may have a short adjustment period as they learn the basics of system operation, but most users are off and programming the system with ease once they get the hang of it. Whether you are a long-time user of alarm systems, or this is your very first system, you should have a great experience in setting up and using your 2GIG Edge Alarm Panel. You will also appreciate the flexibility and freedom that comes with four (4) Smart Area Partitions that have returned from the 2GIG GC3, as well as the ability to store up to 100 unique user codes on the system.

You can program up to 100 wireless zones on the 2GIG Edge Security System. Almost all users will find this to be sufficient. In fact, you shouldn't even come close to using this many zones unless you have a very large property. There are a few different types of wireless sensors you can use with the 2GIG Edge. For encrypted sensors, there is the lineup of 2GIG eSeries Sensors that were originally built for use with the 2GIG GC2e and 2GIG GC3e. You can also use non-encrypted 345 MHz sensors, such as those from the 2GIG 345 MHz Series and the Honeywell 5800 Series. There is speculation that 2GIG may release a new sensor lineup, exclusively for use with the 2GIG Edge, but this been neither confirmed nor denied. The 2GIG Edge is also compatible with the 2GIG IMAGE3 Image Sensor*.

To get the 2GIG Edge monitored, you must connect it with the Alarm.com servers. This is done using the panel's integrated Verizon LTE Communicator and its internal WIFI card. Per Alarm.com requirements, the Verizon LTE module must be activated and registered for alarm monitoring service. In other words, you cannot activate on IP (WIFI) only, and you must get a monitoring plan that includes cellular service, such as an Alarm Grid Gold or Platinum Level Plan or if you don't require automation or remote access, you can choose Cellular Alarm Monitoring. More information on all of our monitoring plans can be found here. Once you activate the cellular communicator, you can also configure an additional communication path through WIFI. Using both internet and cellular together is commonly referred to as "dual-path" connectivity, and it offers the best of both worlds. You will get the super-fast speeds associated with the WIFI network, along with the excellent reliability of cellular. All of our cellular plans also include internet connectivity at no extra charge. All you need is available WIFI in your home or office. If LTE cellular signal requires a boost in the area where the panel is mounted, the 2GIG ANT5XL-GC3 antenna can be added.

An interesting tidbit with the 2GIG Edge is that its cellular communicator is integrated inside the panel, and it cannot be removed or replaced. This is a double-edged sword. On one hand, you don't have to buy a separate communicator, nor will you need to install one. But if something goes wrong and you need to replace the module, then you would actually need to replace the entire alarm panel. There is also the concern that many, many years down the line, when LTE networks experience their own "sunset", that every 2GIG Edge System will become obsolete and require replacement. But panels with replaceable communicators won't have this problem, as users will just swap out the old LTE communicator and replace it with newer technology (i.e. a 5G communicator). But luckily, such an "LTE Sunset" isn't expected to occur until at least the mid-2030s. You can reliably use the 2GIG Edge at least until that point in time, so it's still a great investment in protecting your home or business. Also, keep in mind that this is the Verizon LTE version of the 2GIG Edge. An AT&T LTE version of the panel can be purchased here. You cannot switch a Verizon LTE 2GIG Edge to AT&T LTE, or vice-versa. Make sure you opt for the best system based on cell coverage in your area. Check coverage maps if you are unsure.

There is also a Z-Wave Plus controller module inside the 2GIG Edge that cannot be replaced. If you damage this module, then you either have to live without Z-Wave home automation or replace the panel entirely. But setting its inability to be replaced aside, this really is an incredible Z-Wave automation controller inside the 2GIG Edge. In fact, it is a Z-Wave Plus V2 700-Series Automation Controller w/ support for the Z-Wave S2 Security Protocol. This is the very first security system we've seen that utilizes Z-Wave Plus V2! Remember that only Z-Wave Plus devices that support S2 will enroll using that security protocol. Z-Wave devices that lack support for the S2 protocol will instead enroll using the S0 Protocol. There are all sorts of Z-Wave Plus Smart Home Devices you can enroll with the 2GIG Edge. This includes many lights, door locks, smart thermostats, and more!

When you enroll a Z-Wave device with the 2GIG Edge, you gain the ability to control that device locally at the 2GIG Edge System itself. You can even create smart scenes and perform them locally at the panel. This is ideal for making your life more convenient and saving money on energy expenses. However, the real excitement comes from having the 2GIG Edge System monitored and set up with Alarm.com service. This will allow you to control the system remotely from the Alarm.com Mobile App on your Android or iOS device. You can use the Alarm.com Mobile App to arm and disarm your system, check current system status, control your programmed Z-Wave home automation devices as well as include them in fully customizable smart scenes. With a monitoring plan that supports video, you can also view the live feed for Alarm.com Security Cameras, and so much more. Alarm.com also opens up the possibility for integrations with smart home voice assistants like Google Assistant, Amazon Echo, Amazon Alexa, Siri Shortcuts, and more.

And the 2GIG Edge wouldn't be complete without its own array of amazing features and functions. There are so many features that you can take advantage of. These include disarming based upon facial recognition, optional automatic Bluetooth disarming that you can set up with your smartphone, an integrated glass break detector that offers advanced audio analytics for false alarm prevention, a front panel camera used for taking disarm photos and identifying individuals, 2-way voice functionality, one-touch arming capabilities, the ability to stream certain Alarm.com Cameras right from the panel, emergency panic buttons, a wired bell output, two (2) open-collector outputs, and so much more. The 2GIG Edge receives firmware updates over-the-air (OTA) from Alarm.com, or you can locally update the firmware using a USB drive.

For power, the 2GIG Edge relies primarily on a 14VDC, 1.7A transformer. You must supply your own wiring for the transformer. A Honeywell LT-Cable works great for this task, or you can use any standard alarm wiring. It is also known that 2GIG is making their own prepared cable available, which will use the SKU of 2GIG-EDG-CBL. The 2GIG Edge also uses a lithium-polymer backup battery that offers at least 24 hours of backup power at a full charge. This battery has a SKU of 2GIG-EDG-BATT. The Edge Panel has dimensions of 7.5"L x 5.625"W x 1.0D, and it weighs 1.39 lbs. Mounting hardware comes included with the system. Certifications include UL & cUL Listed, SIA CP-01 Compliant, and much more. Also note that the 2GIG Edge supports both the 2GIG CP-DESK Table Mount and Desk Stand and the 2GIG PAD1-345 Touchpad Keypad. It also has its own signature touchscreen keypad called the 2GIG Edge Remote Keypad.

*Note that the only image sensor compatible with the 2GIG Edge is the 2GIG IMAGE3. However, the Edge will not support this device until a 2GIG XCVR3-GC3 is added. In panel Firmware Version 3.1.1.016 an issue where captured images couldn't be uploaded to Alarm.com was corrected and once the panel has been updated this feature functions as intended.