How Do I Default a Honeywell SiXMINICT?

It is necessary to default a SiXMINICT if the sensor is already enrolled with a panel, but that panel cannot be accessed to delete it and the sensor needs to be used with a different panel. In that type of situation, if the SiXMINICT is not defaulted, the device will not be able to be learned-in with the new system. Since the SiXMINICT uses 128-bit AES encryption, it can only be enrolled with one system at a time. Defaulting the sensor will reset its memory so that it thinks that it is not paired with a system. From there, the sensor can be successfully paired with a different Honeywell Lyric Controller.

NOTE: A SiXMINICT can only be defaulted within the first 24 hours of being paired with a system. After 24 hours, the only way to clear the sensor is by following the process to delete the sensor from the original Lyric panel.

Complete the following steps to default a SiXMINICT Contact:

1. Open the device. Gently pry the front of the device open and remove the back cover. This will allow access to the inside of the sensor.

2. Remove the battery. The SiXMINICT receives power from a CR2450 coin battery. Carefully remove the installed battery from the sensor. This is best done using a small tool. 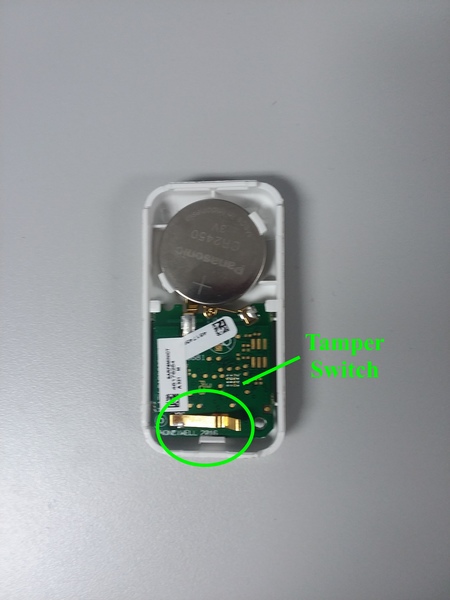 4. Default the sensor. While the tamper switch is held down, reapply the CR2450 coin battery. The battery should be installed with the + symbol showing, as seen in the above image. Applying the battery while the tamper is pressed down will tell the sensor to reset its memory. By doing this, the SiXMINICT can be paired with a new system. Once the sensor has been defaulted, the back cover can be reapplied.