How Do I Determine the Age of a Honeywell Wireless Smoke Detector?

Honeywell Security doesn't make smoke detectors. They have them made, with a Honeywell RF transmitter built-in, by System Sensor, also owned by Honeywell. For this reason, the date code on smokes like the 5808W3, and 5806W3 don't follow Honeywell's format, but instead follow System Sensor's.

For Honeywell security products, the date code is indicated by a letter, corresponding to the year of manufacture, and a 3 digit number, indicating the day of that year. A helpful guide to determining the date of manufacture on Honeywell products can be found here.

System Sensor's format is a 4 digit number. The first digit indicates the last digit of the year of manufacture, the next 2 digits indicate the month in that year, and the final digit indicates the week of that month. In the example below, this smoke was manufactured in 2012, in March, during the 3rd week. The problem with this format is, it's hard to tell a smoke manufactured in the year 2002 from one made in 2012. In fact, the only way to tell the difference, is to know that the smoke was purchased after 2002 but before 2012, or that it was purchased new after 2012. This can present a problem when moving into a new home, where smoke detectors were installed by the previous owner. For this reason, when buying a home, find out when system components were installed, so you have some basis for determining what year any of the components may have been manufactured. This is important, as the product warranty against manufacturer's defects/workmanaship, for smoke detectors, as well as any other security system components, begins on the date of manufacture, not on the date of sale or installation. 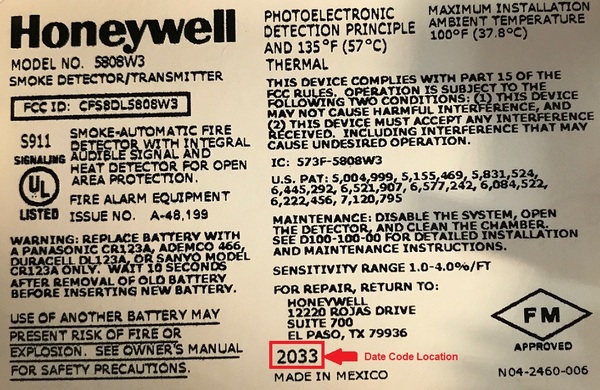 The SIXSMOKE is another Honeywell wireless smoke detector where the date code can differ from the Honeywell norm. On the SIXSMOKE, the date code is either located on the mounting plate (pictured below), and follows the same format as that described for the 5808W3, or it's located on the sticker on the back of the smoke itself, and follows the traditional Honeywell Date code format, described above. Shown below is a date code sticker from the smoke base. If on the base, the sticker will always show "Do Not Remove". In this example, the smoke was manufactured in 2015, in July, during the 2nd week. With this type of date code, you need to be sure you don't mix and match smokes and their bases. If the Date Code is not located on the base, it will be on the sticker on the back of the smoke itself, similar to the image shown above, just above the MAC address sticker. However, it will follow the traditional Honeywell format of a letter followed by a 3 digit number, described in the previous paragraph.

Click Here to Learn More
Jorge Valero
January 24, 2018 15:41
You should replace smoke detectors every 10 years or if they go bad before then
David & Barbara Monoson
January 24, 2018 13:50
Does this detector need to be updated / replaced every several years? David