You can use the Honeywell 5800C2W with a Qolsys IQ Panel 2 Plus by connecting wired sensors to the zone inputs on the 5800C2W. Then put the IQ2+ into its Auto-Learn mode, and fault and restore each wired sensor to enroll it with a wireless zone on the IQ2+. Finally, configure the zones. 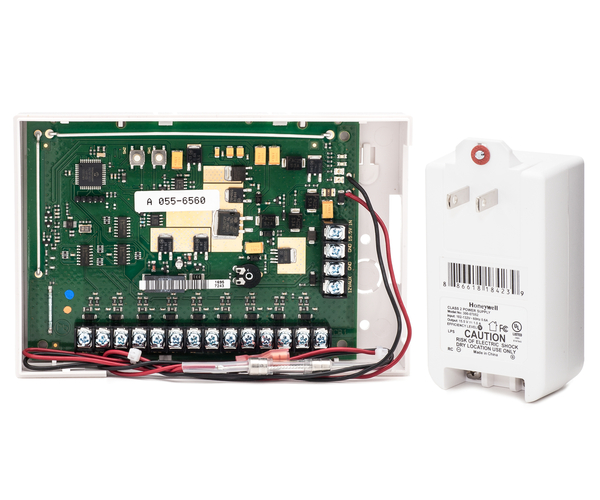 The Honeywell 5800C2W is a wired to wireless converter. Hardwired sensors connect with the 5800C2W, and it then sends out 345 MHz wireless signals on their behalf. This allows the wired sensors to work with a 345 MHz wireless system that otherwise wouldn't be able to accept them. This includes the 345 MHz IQ Panel 2 Plus. That is the IQ2+ that comes in the silver & white box and offers Legacy Honeywell & 2GIG Support. There are nine (9) wired zone inputs on the 5800C2W, and you can use virtually any type of wired sensor with the 5800C2, except for life-safety sensors like smoke detectors and CO detectors.

Complete the following steps to get the existing wired devices set up with the 5800C2W:

1. Mark existing wires. When you are bringing the wired sensors from the old hardwired panel to the Honeywell 5800C2W, it is helpful to know which wires are associated with which zones. You may find that the wires were already marked and labeled by the original installer. If not, then have one person go through the building and fault sensors (e.g. open doors/windows, walk in front of motion sensors, etc.) while another person checks the keypad to see which zone number and/or descriptor appears for each device. Once you have this information, check the wiring diagram for the old wired panel, and determine which wires go with which system zones. Mark the wires accordingly so you know what each one is for. This will help ensure that you stay organized as you transfer to the 5800C2w.

2. Power down the system. If you haven't already, power down the old hardwired system entirely. Do this by removing both AC power and battery power. You can drop AC power by unplugging the transformer or flipping a switch at the circuit breaker. You can remove battery power by disconnecting the positive (+) wire from the battery. This is usually the red wire. All of the system keypads will go blank and no LEDs should be illuminated after power has been removed.

3. Replace panel with 5800C2W. Remove all the marked zone wires from the old alarm panel. Assuming that the old panel had an enclosure cabinet, you can likely keep it and use it to house the 5800C2W backup battery. However, you should not mount the 5800C2W inside the metal enclosure, as it can interfere with wireless signals. If the panel was using a 12V, 4Ah battery that is still good, then you can continue using it with the 5800C2W. Otherwise, consider buying a new battery, such as an UltraTech 1240. Mount the new 5800C2W next to the existing enclosure. Then connect each wired zone input from the old panel to a zone input of the Honeywell 5800C2W. 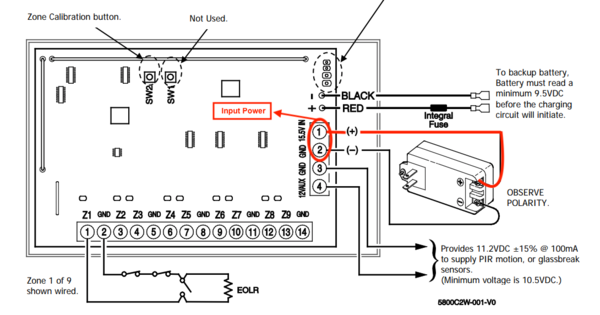 The Honeywell 5800C2W has support for up to nine (9) zones. If you require further wired sensor support, then you can use one or more additional 5800C2W units. Just keep in mind that each one will need its own power supply and battery. Multiple Honeywell 5800C2W units should not share a battery or transformer. You must use end-of-line resistors (ELORs) at every active zone being set up on the 5800C2W. Resistor values ranging from 1k to 10k can be used. The unit even comes with nine (9) 2.2k ohm resistors, which are color-coded Red-Red-Red-Gold. If you are adding new resistors, such as in a case where the original wired panel did not use any EOLR, then they should be wired in Series for Normally Closed (NC) sensors, or in Parallel for Normally Open (NO). Any sensor that already has a resistor with a value between 1k and 10k Ohms can just have its wires relocated from the old panel to a zone input pair on the 5800C2W. There are also auxiliary terminals (12VAUX and GND) for 4-wire sensors that draw power, such as motion detectors, and glass break sensors.

4. Calibrate the unit. Once all the zone wires and end of line resistors have been connected, check and make sure that all devices are in their normal, undisturbed state. That is, doors and windows should be closed, motions and glass breaks should not be detecting any activity, etc. Once you are ready, press and release the Zone Calibration button on the 5800C2W (SW2). LED #1 will flash red for half a second. Then it will turn solid green. This indicates successful calibration. Please note that any NC zone that isn't closed, as well as any zone lacking an EOLR, won't be calibrated. The 5800C2W will treat any such zone as if it does not exist. If you find that one or more zones are not being detected, then try reperforming calibration by putting EVERY sensor into a normal, non-faulted state, ensuring that every sensor has an end of line resistor set up properly, and then pressing and releasing the SW2 Calibration Button. 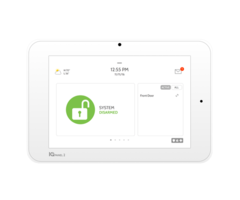 Next, you will need to program the Honeywell 5800C2W Zones into the 345 MHz Qolsys IQ Panel 2 Plus. To do this, complete the following steps.

1. Access Auto-Learn. Start from the main screen of your Qolsys IQ Panel 2 Plus. Click the small grey bar at the top. Pick Settings > Advanced Settings > Installer Code (default 1111) > Installation > Devices > Security Sensors > Auto-Learn Sensors. You are now at the screen where you can auto-enroll sensors.

2. Enroll a sensor. Fault and restore one of the sensors used with the 5800C2W. The IQ Panel 2 Plus should show that a sensor is requesting to be added. Click OK. Then go through and configure the zone. The Sensor DL ID will be the serial number (SN) transmitted by the 5800C2W unit for the zone you faulted and restored. Choose an appropriate Sensor Type and Sensor Group for the device you are enrolling. Always choose Loop 1 for Honeywell 5800C2W devices. Name the zone something that will help you identify the sensor (e.g. South Bedroom Window), set a Chime and Voice Prompts if you want them. The source should always be SecurityRF-345. Press Add New when finished to enroll the sensor with the system.

3. Repeat for other zones. Repeat the process until you have enrolled all the Honeywell 5800C2W Sensors with the system. Once you are done, press the picture of the house at the bottom of the screen to return home.

4. Test the sensors. You should test the sensors to ensure that everything is working properly. Make sure that your system is on test mode with the central station to prevent any false alarms. To access a testing mode on the IQ Panel 2 Plus, start from the main screen, click the small grey bar at the top, and choose Settings > Advanced Settings > Installer Code (default 1111) > System Tests > Sensor Test. There, you can fault and restore sensors to verify that the 5800C2W is sending zone information to the IQ Panel 2 Plus. Make sure that every sensor is being received. Press the X in the upper-right corner when finished. Then press the picture of the house at the bottom. You can also test sensors from the main screen by faulting and restoring them and seeing that the panel displays the faults and restores. If Chime and/or Voice is enabled for a zone, then you can use those sounds to help you test as well.