What Is a Security System

A security system is a set of equipment designed to send out alerts when a troubling situation arises. This could include a burglary, a fire, a medical emergency, an outbreak of CO gas, an unusually high or low temperature, or a flood. A system consists mostly of sensors and a control panel. 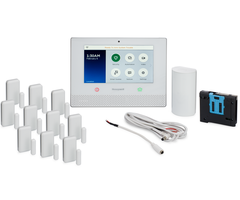 At the center of every alarm system is the control panel. This represents the "brains" of the alarm system. All of the sensors report to this hub. Panels come in two main varieties. These are wireless panels and hardwired panels. Wireless panels feature an integrated keypad and display screen. The end user can control their alarm system right from their wireless panel. The wireless panel will serve as the primary controller for the alarm system. The end user can add one more keypads to the system, but these will operate as secondary controllers. Some examples of wireless alarm control panels include the Resideo Lyric Controller, the 2GIG GC3 and the Qolsys IQ Panel 2 Plus.

Hardwired alarm panels are quite different. These devices consist of a main board housed inside a metal cabinet. Hardwired sensors connect with this board and are run throughout the rest of the building. The hardwired panel itself is usually hidden away somewhere. Popular locations include storage closets, basements and attics. Unlike a wireless panel, the user cannot control their system from the hardwired panel. Instead, they must add one or more hardwired keypads. It is recommended that you add at least one Alphanumeric Keypad to program the system. An example of an Alphanumeric Keypad is a Honeywell 6160. Some examples of hardwired alarm control panels include Resideo VISTA Series Systems and DSC PowerSeries NEO Systems.