What Is The Range Of The Honeywell 5800RP?

The 5800RP wireless repeater will transmit all signals at a nominal range of 200 feet indoors, except Site ID protocol signals. Site ID protocol must be sent at low power, giving it about a range of 50 feet. The actual range to be determined with the security system in the TEST mode.

The 5800RP repeater consists of an RF receiver and a transmitter which is intended to extend the range of Honeywell's 5800 series RF devices including bidirectional devices. The 5800RP receives alarm, status and control messages from 5800 RF devices and repeats these messages to the control panel via the primary receiver. The 5800RP will not repeat signals from another repeater, only from transmitters

The 5800RP can also utilize Site ID Protocol with the 5883 transceivers.

The 5800RP has a rechargeable 7VDC battery which provides up to 6hrs of standby operation after primary power loss.

The 5800RP's operating voltage is 12VDC or 9VAC from a seperate power supply such as the Honeywell 1332 and has an operating current of 80mA.

The 5800RP is supervised, has tamper protection, AC loss detection and has the ability to send an RF jam detection to control panel connected receiver. The RF jam condition is sent as "low battery" in order to prevent an alarm when the control is armed. 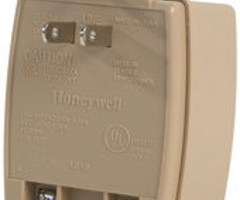