Will a Repeater Extend the 5828's Range?

By using a 5800RP wireless repeater, you can increase the range of a 5828 wireless keypad by an additional 50 feet. This will allow the 5828 to operate at a maximum distance of 100 feet away from the panel. However, the 5800RP must be within 50 feet of both the keypad and the alarm system. 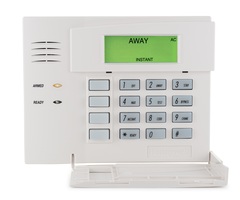 Complete the following steps to start using a 5828 keypad:

1. Program the keypad. Bring the 5828 keypad to your panel to ensure that it is in range. When programming the 5828, you will want to make sure that its House ID number is the same as the alarm system that it is connecting to.

To access keypad programming, press and hold both the (1) and (3) buttons on the keypad for 5 seconds. If powered by battery, press (*) first in order to "wake up" the 5828. If successful, the screen will alternate from "00" to "--". From here, the first two programming fields of the keypad will need to be configured. The first programming field is the House ID. Press (1), and then enter the 2-digit House ID. Then press (*) to save.

The second programming field selects whether the keypad is going to operate with a LYNX system or a VISTA system. Press (2), then press (1) for VISTA or (2) for LYNX and then (*) to save. The keypad will then automatically exit programming after 15 seconds.

The following video will show you how to program the keypad:

2. Test the range. It's possible that the 5828 keypad will work from the desired location without needing a boost in signal range from the 5800RP. If the keypad is in range of the panel, you will see the correct panel status, and you will be able to arm and disarm your system. If you can see the correct system status consistently, the keypad should be within range.

3. Install the 5800RP if needed. If you cannot see the correct system status or arm and disarm the system using the keypad in the desired location, then try using the 5800RP to boost its range. You can do this by simply plugging the transformer for the 5800RP into an outlet. Once the 5800RP is plugged in, it will immediately begin repeating RF signals. For best results, you will want to put the 5800RP halfway between the 5828 and the panel, no more than 50 feet from each.

Once the 5800RP is active, test the keypad by checking its status and by attempting to arm and disarm the panel from the 5828 in the desired location. You may need to try the 5800RP in multiple locations before you achieve the desired result. If you cannot get the 5828 keypad to work no matter where you place the 5800RP, there may be an issue in the environment that can't be solved using the 5800RP. The 5800RP is excellent at resolving distance issues, but it can't always solve issues involving obstructions to the RF signal. This is because the 5828 must be able to get its signal to the 5800RP, and the 5800RP must then be able to get that signal to the panel. If an obstruction, such as a refrigerator or large metal HVAC duct work, lies within either of these paths, the signal may fail to reach its destination.

After you determine a final location for the 5800RP, you can program it to the panel so that your system will notify you in the event of supervision loss.

4. Install the keypad. Once you have determined a final location for the keypad, you can install it. Remove the 5828 from its back plate, and then carefully mount the back plate to the wall using screws and wall anchors. Once the back plate has been mounted, the keypad itself can be attached.

The video shown below will help you with installing the 5828 keypad: