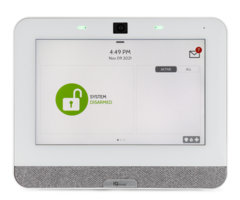 This IQ Panel 4 has a built-in dual-band WIFI module and an AT&T LTE Cellular Communicator. It supports 915 MHz PowerG and Honeywell/2GIG 345 MHz wireless sensors. With support for Z-Wave Plus V2, and an 8-core Qualcomm SnapDragon Processor. Buy the Qolsys IQ Panel 4 here.

The IQ Panel 4 is available now from Qolsys. This model includes an AT&T LTE communicator, with dual-band WIFI built in. For security, PowerG 915 MHz and Honeywell and 2GIG Legacy 433 Mhz RF sensors are supported. It has a 7" capacitive glass multi-touch touchscreen and supports 128 zones, with 242 users.

For user interaction, the panel comes with a 7" touchscreen. This has become the standard in the security industry for wireless All-in-One (AiO) systems. Qolsys is planning to introduce a new and updated User Interface (UI) in the coming months. The current UI is identical to the IQ Panel 2 and 2 Plus. Once the new interface has been rolled out, after sampling it, users will have the option to go back to the original layout, or stick with the new and improved one. The new layout will closely resemble the format users see in the Alarm.com app, for a more cohesive customer experience.

Inside the Qolsys IQ Panel 4 is a Qualcomm MSM8953 chipset with an 8-core Qualcomm SnapDragon Processor and 16 GB of NAND Flash memory. The panel is built on the Android 9 operating system. For comparison, the IQ Panel 2 and 2 Plus were based on the Android 5.1 platform and had a quad-core processor. The upgrade to the hardware and memory is intended to provide a lot of room for new features. Expect plenty of updates to this system, based around customer feedback once the panel has been widely adopted.

Qolsys systems are not modular in nature, as compared to some other systems. This means that the cellular module, the WIFI card, and all other hardware inside the panel is installed from the factory. These modules can't be end-user replaced. If the cellular unit fails, or if the cellular carrier selected doesn't have good quality signal in the area where the panel will be used, then the entire panel must be replaced. For this reason, be sure to choose the panel with the communicator from the cellular carrier that has the best signal in your area, regardless of which carrier your personal cell phone may use. This unit comes with an AT&T LTE Communicator. The cellular communicator's IMEI number is used to register the system on the Alarm.com platform. For this reason, when using a Qolsys panel with Alarm Grid's monitoring service, you must always choose a plan that supports cellular communication. For Alarm grid, that is our Gold and Platinum level plans (Self or Full). If a Verizon LTE communicator would work better in your area, we have a Verizon LTE Version available.

By itself, the Qolsys IQ Panel 4 is impressive, but when you connect the panel with Alarm.com it really opens up the panel's capabilities. Alarm.com is the company who maintains the servers that allow the IQ Panel 4 to communicate to a central station and/or to the end-user. The Cellular unit inside the panel is registered with Alarm.com. This information is then associated with the account at the monitoring station (where applicable). When the panel needs to transmit a signal, it sends the signal to the Alarm.com server. The server then determines where that signal should be sent. It can go to the interactive service and then be sent on to the customer as an email, text, or push notification. It can be forwarded to a monitoring station for processing and possible dispatch, or both. Which type of service you receive depends on the monitoring plan you sign up for. Regardless of which option you choose, the delivery of signals occurs within seconds.

With the Qolsys IQ Panel 4, the placement of all hardware modules inside the panel has been optimized to allow for the best wireless range possible on each device. With the Qolsys IQ Panel 2 Plus, PowerG sensors could achieve about a 2,000 foot open air transmitting range. The IQ Panel 4 can support a range of up to 4,000 feet. For this reason, transmitting range issues are unlikely on this system with PowerG sensors, but if you find yourself experiencing range issues, a PowerG repeater can be used to increase the transmitting range by up to two (2) times the original distance. There are also gains in range for the Legacy Security RF receivers, and the LTE and WIFI communicators.

The panel has an 8MP front-facing camera, this has been increased from 5MP on the IQ Panel 2 Plus. In addition to higher quality images, the camera also has a wider viewing angle at 120°. The up/down viewing angle of the camera can be manually adjusted using a small screw located on top of the panel. With it, users can dial-in the perfect angle for disarm photos, peek-ins, and alarm videos. This allows the end-user to adjust the camera view for taller or shorter panel users based on the individual needs at the premises. One item that has been removed from the panel is the Micro SD card slot. Updates and images will now be sent to the panel by connecting a smartphone or tablet to the IQ Panel 4 via its built in access point (AP). When the panel is connected to WIFI, firmware updates can be sent to the panel from Alarm.com Over-the-Air, or by requesting the update through the panel's UI. There is no charge for these updates, but remote upgrades can only be sent via WIFI. The panel will not download an update via Cellular Data.

The Qolsys IQ Panel 4 has support for up to 128 zones using PowerG and/or Honeywell or 2GIG 345 MHz Security RF sensors. This makes it the perfect replacement for an older Honeywell or 2GIG system that still has working RF devices. With the 700-Series Z-Wave Plus V2 controller built in, up to 137 Z-Wave, Z-Wave Plus, and Z-Wave Plus V2 devices can be integrated with the system, including Lights, Locks, Thermostats, Water Valves, and Relays. When installing new Z-Wave devices, choose devices with the latest Z-Wave version that is supported by the controller whenever possible. Doing so will provide the best possible experience for the user. Older and newer Z-Wave devices can be mixed on the same network, as long as the user is aware of the limitations that will come with such a setup. Up to 242 users are supported with one (1) Dealer Code, one (1) Installer Code, and 240 users with the role of Master, User, Guest, or Duress applied to each.

Qolsys has plans to release a new remote WIFI touchscreen keypad that is compatible with this system to replace the current Qolsys IQ Remote. The IQ Panel 4 can support up to four (4) wired keypads using the Corbus connection of the DSC PG9WLSHW8 Power G Wired to Wireless Converter. In addition, it can support up to five (5) PowerG WS9LCDWF9 Wireless Keypads, and up to three of the current Qolsys IQ Remote WIFI touchscreen keypads. With all these available options, you're sure to find the perfect configuration for your system and any remote arming stations or touchscreen keypads you may want.


The Qolsys IQ Panel 4 is available in either black or white, allowing users to choose the color that best blends into their decor. With the new larger speaker system, the height of the panel has changed slightly, but the depth and width remain consistent with the previous panel's size. The IQ Panel 4 comes with a smart mount system. Power and battery can be connected without ever separating the front from the back of the system. And, since there are no hardwired zones available inside the panel, the professional or DIY installer will never have to see the inside of the system. The power wires connect to the mounting plate, and once the panel is mounted to the mounting plate and the transformer is plugged in, the unit powers up. This is similar to the way thermostats have been wired for years.


Another upgrade for the Qolsys IQ Panel 4 is the speaker system. There are four (4) front-facing speakers built into the bottom of the panel. Where the IQ Panel 2 Plus had two (2) 1-Watt speakers, the IQ Panel 4 has four (4) 4-Watt speakers. The panel can be used as a Bluetooth speaker, perfect for playing music or listening to podcasts. If you add the Qolsys IQ Base, which is a combination desk stand and subwoofer, the IQ Panel 4 can compete in sound quality with many devices that act only as a Bluetooth speaker. The IQ Base, which is sold separately has three (3) bass speakers built into a compact package. The IQ Base comes in light gray to go with the IQ Panel 4 in white, and in charcoal for those who choose to purchase the panel in black.