Can Z-Wave Devices be Included or Excluded Using the Tuxedo Web Interface?

Regardless of which version you are talking about, the Tuxedo Keypad is a hardwired touchscreen keypad and Z-Wave smart home automation hub for a Honeywell VISTA Security System. The device is used for performing basic system functions like arming, disarming, and bypassing zones. You can also access more advanced system functions and programming through a special Console Mode feature that allows the Tuxedo Keypad to mimic a push-button Alphanumeric Keypad. You can build a Z-Wave home automation network around a Tuxedo device by pairing smart home peripherals like lights, locks, thermostats and more.

Internet connectivity is an important feature of any Tuxedo Keypad. Older models relied upon wired ethernet connectivity, while newer models offer the freedom and convenience of WIFI. But regardless of how your Tuxedo device gets online, connecting the keypad to the internet will open up the option of controlling the Tuxedo and the system through the Tuxedo Web Interface. This platform is accessed by entering the local IP address of the Tuxedo into a web browser on a device connected to the same local IP network* as the Tuxedo. 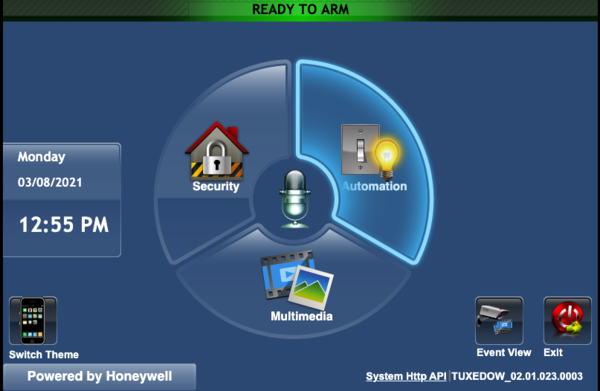 The Tuxedo Web Interface appears the same, regardless of which generation or version of the Tuxedo you are working with. It basically looks exactly the same as the old Tuxedo Touch and Tuxedo Touch WIFI user interfaces (UIs). Once you have connected to the device, you can then navigate the web interface to perform many of the same functions there as you would perform on the Tuxedo Keypad itself. However, one action you cannot perform is Z-Wave programming. You cannot add Z-Wave automation devices, nor can you delete existing ones. Such actions must be performed locally at the Tuxedo itself.

Once you are controlling the actual Tuxedo locally through the touchscreen itself, you can put the keypad into an inclusion mode for pairing new devices. You can also put the keypad into an exclusion mode for deleting existing devices, and also for clearing the network data of Z-Wave devices, including Z-Wave devices that may not be actively paired with the Tuxedo's Z-Wave network. You will also need access to the Z-Wave device itself to initiate its inclusion or exclusion function. Many Z-Wave devices will have a designated button that is used for inclusion and/or exclusion, or you may need to enter a specific code or command on the device. Refer to the Z-Wave device's manual for more information.

*It is possible for a network-savvy individual to set up port-forwarding on their network, allowing them to connect to the Tuxedo keypad while off-site. Due to the variety in network equipment, continuous changes in networking in general, and the widely varying comfort level of DIY users with making network changes, Alarm Grid offers only the manufacturer's documentation in support of this configuration.