How Do I Bypass Zones Using a Honeywell Tuxedo Touch Keypad?

You can bypass zones using a Honeywell Tuxedo Touch Keypad by accessing the system zone list, highlighting the zone(s) you want to bypass, clicking the "Bypass Selected" button, and entering a valid system code to confirm the bypass. The screen will then display a yellow "Ready Bypass" bar.

The Honeywell Tuxedo Touch is not an actual security system. Rather, it is a touchscreen keypad that is used for controlling a Honeywell VISTA Alarm Panel. When you use the Tuxedo Touch Keypad to perform security functions, it is basically operating as a controller for the VISTA System and telling it what to do. One function that you can perform using a Tuxedo Touch Keypad is to bypass system zones.

If you aren't familiar with bypassing zones, it means that the system will ignore any bypassed zone while the system is armed or disarmed. In other words, whether the system is armed or disarmed, if the sensor associated with a bypassed zone is faulted, then nothing will happen. On the other hand, if the zone wasn't bypassed and the sensor was faulted, then the system would know to take action based on the armed state of the panel, and the programmed Response Type for the zone. This could include triggering an alarm. Long story short, bypassing a zone tells the system to ignore that zone.

The Tuxedo Touch has a menu that displays all of the programmed zones for the VISTA System. By accessing this menu, you can bypass system zones. Complete the following steps to bypass a zone using a Tuxedo Touch Keypad:

1. Access the zone list. Begin from the main screen of the Tuxedo Touch Keypad. Click on Security, followed by More Choices, and then Show Zones. You will be taken to a screen that displays a grid with all of the programmed system zones. 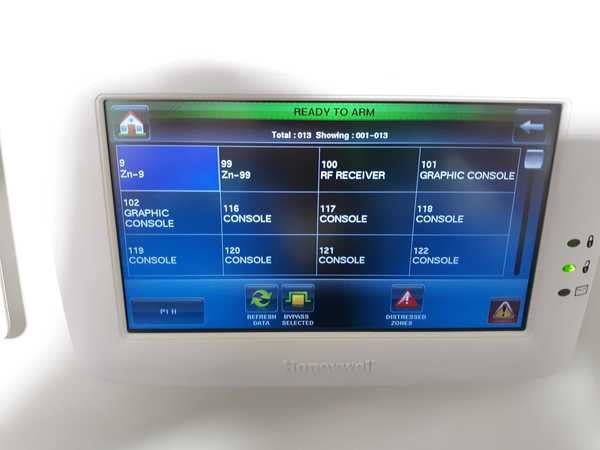 3. Bypass the zones. Click the "Bypass Selected" button at the bottom of the screen. You will be prompted to enter a code. You should enter your Security Code. The Master Code or any Standard User Code can be used to bypass zones. The default Master Code for a Honeywell VISTA System is 1234, but this code is almost always changed for security purposes. Enter the Code that you have set up for your system. After entering the code, the keypad will chime to confirm the bypass and a yellow "Ready Bypass" message will be displayed across the top bar. If you are not needing to clear the bypass status for any zones, you are finished. You can return to the main screen by clicking the picture of the house in the upper-left corner. 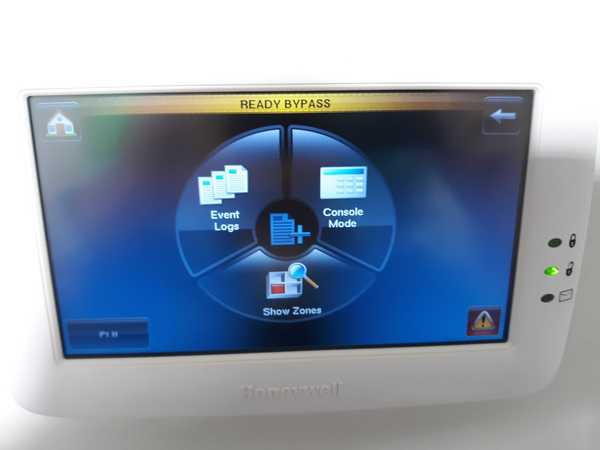 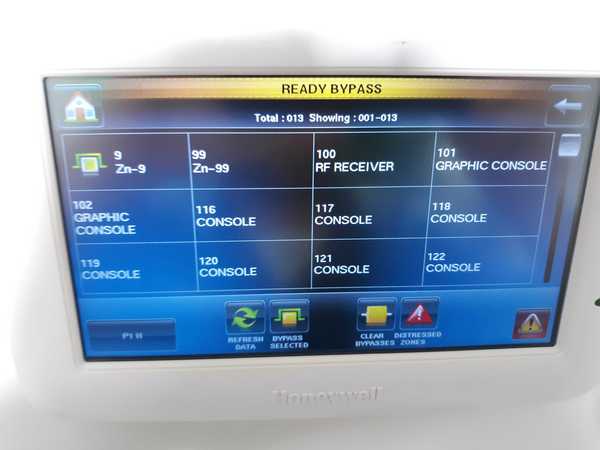 Highlight any bypassed zone that you want to clear the bypass for, and then press the "Clear Bypasses" button at the bottom of the screen. You will be prompted to enter a valid system code to confirm. Again, you can use your system's Master Code or any Standard User Code for this purpose. After successfully entering a code, the keypad will chime to confirm. If you cleared the bypass status for every zone, then a green "Ready To Arm" message will be displayed across the top of the screen if there are currently no zones that are open on the system. 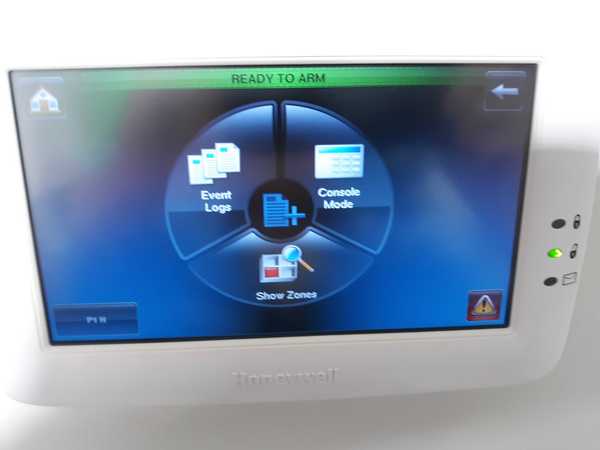