How do I program a Encore FF345 to my Honeywell System?

The Encore Firefighter FF345 is programmed into a Honeywell system just like any other wireless zone. The FF345 can listen for the sound of both smoke detectors and carbon monoxide detectors, for double the impact. You can use the FF345 to integrate combination devices with the system. 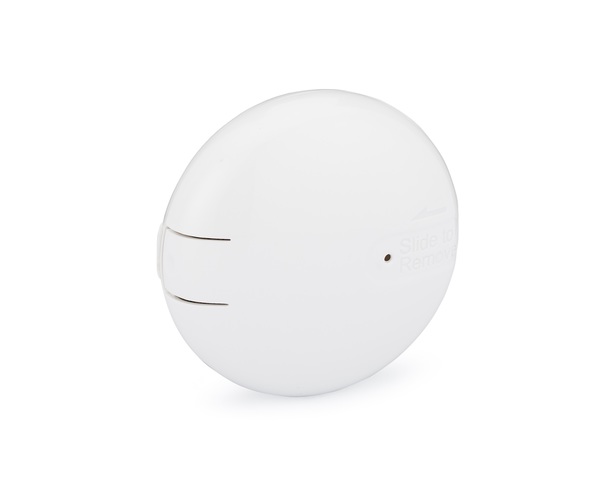 The Encore Firefighter FF345 works by being mounted within 6 inches of a smoke detector, carbon monoxide detector, or combination detector. When the FF345 hears the unique sound of either the smoke or the CO detector going into alarm, it will then send a wireless signal to the alarm panel, activating the appropriate zone. This device works best for "interconnected" smoke/co detectors, where if one device signals an alarm, all of the like devices in the location will begin to sound. In this way, a single FF345 may allow protection for the entire building. The FF345 does not detect Smoke, heat, or carbon monoxide, so you must mount it near an actual detector for it to be effective.


The original Encore Firefighter FF345 was a wireless module that allowed you to integrate your existing smoke detectors with a Honeywell wireless alarm system. The original FF345 was programmed the same way as a Honeywell 5816. The 5816 is a door sensor that can be programmed by using a 7 digit serial number usually mapped to loop 2. The serial number could be manually entered and the loop (2) assigned, or you could auto-enroll the device. After the serial number and loop were set, the device or zone type would be set to "Type 09 - Fire" or "Type 16 - Fire with Verification" The FF345 needed to "hear" two cycles of the temporal 3 pulse sound that the wired smoke detector made before it would trip, so Zone Type 09 Fire without Verification was recommended.


Newer versions (Version 1.5 or higher) of the Encore FF345 support listening for both the temporal 3 sound that smoke detectors make (beep-beep-beep, pause, beep-beep-beep, pause) as well as the temporal 4 sound that carbon monoxide detectors make (4 rapid beeps, pause, 4 rapid beeps, pause). Each FF345 comes with a sticker showing a 7-digit serial number. This is the serial number for the "Smoke" zone. It should be programmed using loop 1, with a zone type of Fire, or Fire w/ Verification. Alarm Grid recommends using Zone Type 09 - Fire, no verification for this.

If you have a LYNX Touch system, auto-enrollment is a breeze. Follow the steps below:

1. Enter Programming. From the Home screen select Security > More > Tools > Installer code (default is 4112) > Program > Zones. Highlight the zone you would like to program and click edit, or click "Add New" to be taken to the edit screen of the next available zone number.

2. Program Serial Number. Click on the Serial Number field. The screen will display, "Enter serial number or activate sensor." Once you see this message with the number pad on the right, you can press the 'Learn' button of the FF345 3 times. You should hear 1 beep after the first press, 2 beeps after the second press and 3 beeps after the third press. Then you should see the serial number automatically populated in the serial number field and the loop number set to 1. The learn button should be clearly marked on the device.

Once the device is enrolled to your system it will be triggered by the sound of a local smoke or carbon monoxide detector. Proper orientation relative to the closest smoke detector is imperative. Mount this device within six inches of the detector to be monitored. If possible, it's best to mount the FF345 near a smoke that is somewhat isolated from other smokes in the area. The purpose of doing this is so that the FF345 can only "hear" the detector that it's meant to monitor. If the FF345 can hear multiple smokes, the beeping sounds of the different detectors may confuse the sensor and cause it to require more sound input before it will activate.

Since all smoke detectors are slightly different from each other, after enrollment you should press and hold the test button on the smoke detector being monitored for at least 30 seconds. This should trigger an alarm. It is also a good idea to take the batteries out of the FF345 and put them back in prior to testing. This begins a test period that will last for one hour. During this test only a single round of temporal 3, or temporal 4 beeping is required to cause the FF345 to signal an alarm.

Click Here to Learn More
Frank
September 13, 2016 22:23
We are very curious to hear what they say. Thank you for the update. Be sure to test this product regularly.
carlos rosado
September 13, 2016 21:47
Yes I tested it in loop 1 programming it as zone type 9 and then zone 16 and it worked in both setups. I received both fire trouble (when cover was removed) and Fire Alarm (testing smoke detector) I left it as zone type 16. I sent Encore Controls an email questioning why different versions may be using different loops. I will pass on any response I get.
Sterling Donnelly
September 13, 2016 21:24
Well as long as it's working on loop 1 (assuming you've fully tested it), I would leave it like that but if you do check with CKG and they know why it needed to be set for loop 1, we'd be curious to hear what they say.
carlos rosado
September 13, 2016 21:21
I purchased it on Ebay from CKG Security and Alarms,LLC. It came in the Fire Fighter Encore green and white box with instructions and everything identifies it as being a FF345. Says it's version 1.5
Sterling Donnelly
September 13, 2016 13:35
Usually the FF345 should be on loop 2 but we have heard of some people that got a module that needs to use loop 1. We haven't determined if that's a different version of the same unit or if Encore made a difference to the unit over time. Where did you purchase the unit and are you sure it's really an Encore FF345 and not some other similar unit?
carlos rosado
September 13, 2016 12:45
I may have misunderstood the directions. Everything I read on the internet says to use Loop 2. I switched it to loop one and it works now. Thanks for helping Frank!
carlos rosado
September 13, 2016 00:28
I confirmed that the serial number was entered properly and RF receiver was enabled. Rebooted and readdressed keypad. Still nothing is showing on keypad when smoke detector is tested for 30 seconds. The only thing that shows is a fire trouble when FF345 cover is removed.
Frank
September 12, 2016 18:45
Did you confirm the serial number was entered properly? If so, you will want to confirm that your 6162RF keypad has the RF receiver enabled. I would recommend rebooting and pressing 1 and 3 simultaneously to readdress the keypad. Press 1 to toggle the RF receiver on if it's not already.
carlos rosado
September 12, 2016 18:05
I have installed and programmed a Encore FF345 to zone 17 using a 6162RF on a Vista 20P. I used zone 17 because I have one 4219 zone expander installed. I'm pretty sure I have entered all the correct values in *56 programming mode. While holding the smoke detector (interconnected) test button for at least 30 seconds I get nothing on the keypad. If I remove the cover on the FF345 I get a fire trouble on the keypad which clears when cover is installed. I changed zone type between 9 and 16 with same results, nothing on the keypad. When the smoke detector is going off a red light on the FF345 pulses in sync with the smoke detector siren. Anyone have any ideas what might be wrong?