How loud is the SIXSIREN on a Lyric security system?

The SiX Siren is a bi-directional, supervised and encrypted wireIess siren for use with the Lyric alarm. It operates in the 2.4 GHz range. It requires 4 1.5V AA Lithium batteries, Honeywell part number 462. Because these devices are wireless, and battery operated, you can put them in multiple locations throughout the protected premises. Each SiX Siren requires one zone for programming, and can also be programmed to mimic chime sounds from the Lyric Controller.

It’s difficult to describe in words how “loud” something is. I can tell you that the SiX Siren sounds Alarm at 85dB, and Chime at about 35dB, but it may be more helpful to compare this to some commonly heard sounds. 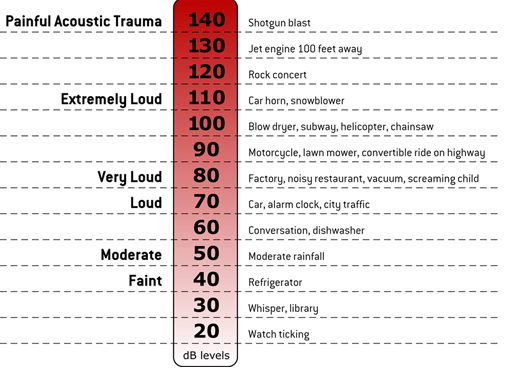 Bear in mind that every 10dB increase is equivalent to a doubling of the sound level at the previous dB rating, so 50dB is twice as loud as 40dB, 80dB is twice as loud as 70dB, and so on. Also, 85dB may not seem that loud. There are much louder sirens available for hardwired systems, which may range up to 120dB, but since you can potentially have a SiX Siren in each room, as opposed to a single high current sounder tied to a bell output, such as you might see on a hardwired panel, this siren truly packs a punch, and allows you to put the sound right where you want it.