What Do The Lights Indicate on a Honeywell SiXSiren?

The lights on a Honeywell SiXSiren indicate certain issues or problems that are currently being experienced by the security system or the siren itself. A sounder will often accompany the lights. Once the problem is taken care of, the lights on the SiXSiren should go away on their own. 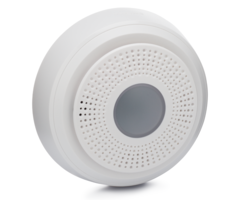 The Honeywell SiX Siren is an external wireless siren that is designed exclusively for use with the Honeywell Lyric Controller. It is fully protected by 128-bit AES encryption, and it is capable of connecting to a 2.4 GHz WIFI network. The device has two LED lights so that the user can quickly identify certain issues that may be affecting the siren or the entire security system. For more information on these LED lights and what they mean, please consult the SiXSIREN LED Sounder Addendum.

Below are the possible LED light notifications that the siren can display:

Rapid Flashing Green followed by Solid Green, with Chirp: The device is powering up and currently trying to enroll with the system.

Slow Flashing Green, with Chirp: The device is powering up, and it is already enrolled with the system.

Strobe Red and White Lights, with Siren: There is a fire alarm or a carbon monoxide alarm. Evacuate the building immediately.

Solid White, with Sounder: There is a burglary alarm.

Slow Flashing Red: Siren has low battery. If the battery is not replaced within 7 days, the siren will begin chirping.

Slow Flashing Green, no Chirp: The tamper switch has been activated.

In order to get the SiXSiren to stop flashing, you must deal with whatever problem is affecting the system or the siren. This can include clearing the alarm, replacing the siren's batteries or closing the tamper cover.

The video below will show you how to program the SiXSiren to a Honeywell Lyric Controller: