What is the VERSA-2GIG Sensor?

The VERSA-2GIG Sensor is a wireless door and window contact sensor that operates at the same 345 MHz frequency as the 2GIG 345 MHz Sensors. This makes the sensor compatible with the Honeywell Lyric Alarm System and the 2GIG Security Systems. The sensor is both affordable and effective. 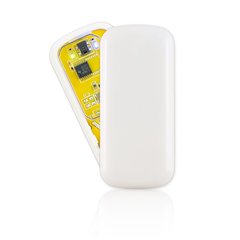 Many users first encounter VERSA Sensors after receiving one in an Alarm Grid System Kit. We include these sensors in many of our non-encrypted kits. Our technicians have found that these third-party sensors work impressively well, and they help us make kits as affordable as possible. We also love the fact that these sensors are extremely compact and easy for DIY users to install. Overall, they are a great option for anyone looking to install some quick and easy door and window sensors.

The VERSA-2GIG has the same design as the other VERSA Door and window Sensors. These sensors all appear identical to the Honeywell 5800MINI. The difference between the various versions of the VERSA Sensors, as well as the 5800MINI, is that each one communicates at a different wireless frequency. This means that each sensor will have a different set of alarm systems that it is compatible with. In the case of the VERSA-2GIG, it communicates at the same 345 MHz frequency and non-encrypted 2GIG Sensors. This allows the VERSA-2GIG to work with 2GIG Panels, the Honeywell Lyric, and the 345 MHz IQ Panel 2 Plus.

The easiest way to tell the VERSA-2GIG apart from the other VERSA Sensors and the 5800MINI is by looking for its inner yellow circuit board. All of the other sensors, while identical on the outside, will have a different colored circuit board on the outside. The VERSA-2GIG uses a 3V lithium CR2032 coin battery for power. Battery life is roughly five (5) years. The sensor measures 2.2."L x 1"W x 0.3"D. The Honeywell Lyric must be running firmware version MR3 or higher to support the sensor.