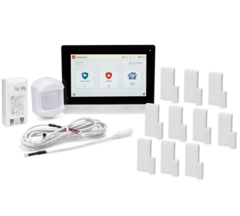 The 2GIG-EDGPK10-AA-ENC is a complete system kit that comes with a 2GIG Edge System with built-in AT&T LTE, ten (10) encrypted door and window sensors, one (1) encrypted motion sensor, and a Honeywell LT-Cable for providing power. Buy this 10-1 encrypted 2GIG Edge Kit from Alarm Grid.

The main attraction of this kit is the 2GIG Edge Alarm Panel. This is the version with AT&T LTE for cellular connectivity. As a wireless all-in-one panel, the Edge is seamlessly operated using its seven-inch (7") touchscreen. Its full color display is beautiful, and its easy-to-understand user interface (UI) accommodates both new and experienced users alike.

For sensor enrollment, there are (100) wireless zones available on the Edge. Supported sensor lineups include the encrypted 2GIG eSeries Sensors, the legacy 2GIG 345 MHz Sensors, and the uni-directional (one-way) Honeywell 5800 Sensors. It's a bit interesting that 2GIG doesn't appear to be planning a release of a new sensor lineup designed exclusively for use with the Edge. It seems they were satisfied enough with their 2GIG eSeries Sensors to continue making them the top peripheral option for use with this new system.

The sensors bundled with this 10-1 kit are all encrypted 2GIG eSeries devices that offer top performance when paired with the Edge. As these are encrypted devices, they offer protection against various wireless attacks that can leave non-encrypted devices vulnerable. This 10-1 system kit includes ten (10) 2GIG DW10e Door and Window Sensors, and one (1) 2GIG PIR1e Motion Sensor. The 10-1 kit size is typically seen as a good starter set for a larger home or a small business, and the system can easily be expanded upon if needed.

You don't need to buy or obtain an additional communicator for your 2GIG Edge System. This system comes with a built-in AT&T LTE Radio for communicating with the Alarm.com servers, as well as a built-in WIFI communicator. Using cellular and WIFI together is commonly referred to as dual-path connectivity. Alarm.com requires that the cellular communication path is active, and most users have WIFI around their homes and businesses, making it a good alternative pathway. Just keep in mind that you will need a monitoring plan that includes cellular service, such as an Alarm Grid Gold or Platinum Level Plan (Self or Full).

Alarm.com service really comes in handy for controlling the 2GIG Edge System remotely, so you will want to make sure that it is included with your monitoring service. Alarm.com lets you operate your system through a web browser or through the Alarm.com Mobile App on your Android or iOS device. You can access the platform to arm and disarm, check current system status, control programmed Z-Wave devices, view the live connection for your compatible Alarm.com Cameras, and so much more.

Also inside the 2GIG Edge is a built-in Z-Wave Plus V2 Controller. This makes it the first security system offered by Alarm Grid with Z-Wave 700-Series technology. It offers the best range and longest battery life when used with certified Z-Wave 700-Series devices. We have only seen a few of these devices as of March 2021, but we expect more to hit the market in the near future. The Z-Wave Alliance and developers surely want to showcase the true potential of the Z-Wave 700-Series, so expect it to be the next big thing in home automation.