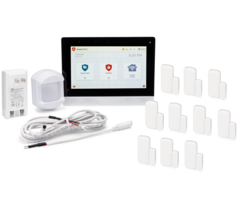 The 2GIG-EDGPK10-VA is a 10-1 system kit that comes with a 2GIG Edge Alarm System with Verizon LTE, ten (10) VERSA-2GIG Door and Window Sensors, one (1) 2GIG PIR1e Motion Detection Sensor, and a Honeywell LT-Cable for providing power. Buy the 2GIG Edge 10-1 Wireless Kit with Verizon LTE here.

The 2GIG Edge Verizon LTE 10-1 Wireless Kit is perfect for a larger home or a business looking to get started with alarm monitoring service. It comes with a new 2GIG Edge with Verizon LTE, ten (10) VERSA-2GIG Door/Window Sensors, One (1) 2GIG PIR1e Motion Sensor, and a Honeywell LT-Cable.

As you may have guessed, the 2GIG Edge Alarm Panel is the big attraction of this kit. It is a sleek and modern alarm panel with support for a wide variety of different functions and features. The system is easy to operate using its seven-inch (7") touchscreen, and navigating the menus is very simple. This is widely considered to be an outstanding security system whether you are heavily experienced or are using a system for the very first time.

There are plenty of sensor options to choose from for the 2GIG Edge. Compatible lineups include the 2GIG 345 MHz Sensors, the uni-directional (one-way) sensors from the Honeywell 5800 Series, and the 2GIG eSeries of Encrypted Sensors. What's somewhat unique about the Edge is that it does not have its own "signature" sensor lineup, and all sensor compatibility comes from backward compatibility. 2GIG has provided no indication that they intend to release a "new" Edge-series of sensors, so you will need to work with the existing lineups that are compatible. Being able to pick and choose from three (3) great sensor lineups will offer you many options. And you can easily mix-and-match if needed. Getting started is made even easier with this 10-1 wireless kit, which includes ten (10) VERSA-2GIG Door and Window Sensors, one (1) 2GIG PIR1e Motion Detector, and a Honeywell LT-Cable for connecting the included system transformer.

You can get this 2GIG Edge System monitored right out of the box, thanks to its built-in Verizon LTE Communicator. The Edge uses this cellular communicator to connect with the Alarm.com servers. Alarm.com requires cellular connectivity, so having that communication path set up is essential. You can also add internet connectivity using the panel's built-in WIFI card. Most cellular monitoring plans also include internet connectivity at no additional charge. While setting up WIFI is technically optional, most users will readily do so, since they usually have WIFI service ready to go in their homes and offices. Setting up the system to use both cellular and internet is sometimes referred to as dual-path connectivity. We recommend using dual-path service, as your system can use the two (2) communication paths to back each other up. In other words, even if one path goes down or becomes unavailable, the system can remain monitored using the other pathway.

To get started monitoring the 2GIG Edge, you will need a monitoring plan that includes cellular service, such as an Alarm Grid Gold or Platinum Plan (Self or Full). You should make sure that whatever monitoring plan you ultimately go with includes connectivity with Alarm.com for security and automation control. That will allow you to access Alarm.com remotely using a web browser or mobile app so that you can control your 2GIG Edge Security System from essentially anywhere in the world. Once you have logged into Alarm.com, you can arm and disarm your system, check its current status, control programmed smart automation devices, view the live feed for Alarm.com Cameras, if included in your monitoring plan, and much more. Again, the Alarm Grid Gold and Platinum Plans are a great place to start looking if you are exploring your options from scratch.