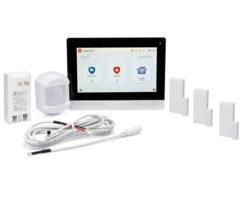 The 2GIG Edge Verizon LTE 3-1 Encrypted Kit is good for smaller homes and apartments looking to get started with alarm monitoring. It has a 2GIG Edge with Verizon LTE, three (3) 2GIG DW10e Encrypted Door/Window Sensors, one (1) 2GIG PIR1e Encrypted Motion Sensor, and a Honeywell LT-Cable.

Like most alarm system kits, the centerpiece here is the alarm control panel, which in this case is the 2GIG Edge. This system has a sleek and modern design with a gorgeous seven-inch (7") touchscreen display. Navigation is made easy thanks to nice and responsive controls, as well as an easy-to-understand user interface (UI) that accommodates both new and experienced users alike. You will have no trouble setting up your new 2GIG Edge System by yourself and ultimately getting the very most out of it.

There are (100) available wireless zones on the 2GIG Edge for adding compatible wireless sensors. You can use the encrypted 2GIG eSeries Sensors, as well as legacy 345 MHz sensors from the 2GIG 345 MHz Series and the uni-directional Honeywell 5800 Series. There has been some speculation that 2GIG may eventually release a new lineup of encrypted sensors exclusively for use with the Edge System. However, 2GIG insists that nothing new is in the works and that their 2GIG eSeries Sensors represent the most reliable and most secure option for the Edge.

We have bundled sensors from the 2GIG eSeries with this 3-1 starter kit. Encrypted sensors like these offer protection against different sorts of malicious wireless attacks that can leave other wireless devices vulnerable. You get three (3) 2GIG DW10e Door and Window Sensors and one (1) 2GIG PIR1e Motion Sensor with this kit. Most users find that this is a suitable start for a smaller home or an apartment. Keep in mind that you can always expand upon the system later on if you need to. Also included with this kit is a Honeywell LT-Cable so that you can easily connect to the included transformer.

This system kit is dual-path ready, and you do not need to purchase or obtain an additional communicator to go with the system. Inside this 2GIG Edge is a Verizon LTE Communicator, plus a built-in WIFI card. Using cellular and WIFI together is referred to as dual-path connectivity. Really, you technically only need to activate for cellular, per Alarm.com requirements, and you can skip WIFI connectivity if you want to. But most cellular monitoring plans include WIFI connectivity anyway, and since most users readily have wireless internet in their homes and businesses, most users will activate across both pathways. And that's good because having two reliable communication paths is always better than only having one.

Alarm.com service is also important, as it is the platform you can use to control the 2GIG Edge System remotely. This is done using a web browser or a mobile app on your smartphone. By accessing Alarm.com, you can arm and disarm your system, check its current status, control programmed automation devices, view the live video feed for compatible Alarm.com Cameras, and much more. Just make sure the monitoring plan you select includes access to the Alarm.com service. For customers interested in monitoring through Alarm Grid, all of the Gold and Platinum plans include cellular communication, with the platinum plans also supporting video surveillance.

Home automation is a big aspect of the 2GIG Edge. It has built-in Z-Wave Plus V2, which is also referred to as Z-Wave Plus 700-Series. This is the latest Z-Wave technology, and while also being backward compatible with older Z-Wave devices, will support the furthest wireless range and the longest battery life when used with certified 700-Series devices. As of March 2021, there haven't been many 700-Series Z-Wave devices released yet, but that should change very soon, as automation developers are looking to take advantage of the new technology.