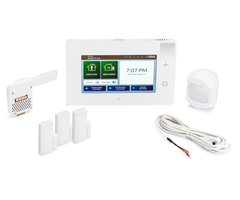 The 2GIG GC3E-PK-AT is a system kit that is perfect for home or business alarm monitoring. As a 3-1 kit, you get three (3) door and window contacts and one (1) motion sensor. You also get an AT&T LTE Communicator for connecting the system with Alarm.com. Buy this GC3e Kit from Alarm Grid.

The 2GIG GC3E-PK-AT is a complete system kit built around the 2GIG GC3e System. This 3-1 kit is perfect for small homes and apartments. In addition to the GC3e Panel, you also get an AT&T LTE Communicator, three (3) 2GIG DW10e Door and Window Contacts, a 2GIG PIR1e Motion, and an LT-Cable.

There are many things to like about the 2GIG GC3e. It is a powerful wireless alarm system with a sleek design. You will love its gorgeous 7" touchscreen display and its ability to support up to 100 wireless zones. It also offers built-in Z-Wave Plus and WIFI functionality. Other features include the ability to program up to 100 user codes, Smart Areas for partitioning, single-touch arming, capacitive touch buttons, and a five-day weather forecast.

This bundled kit includes encrypted sensors that prevent wireless hacking and takeover attempts. There are three (3) 2GIG DW10e Contacts and one (1) 2GIG PIR1e Motion Sensor. The contacts can be used with nearly any door or window, while the motion will detect changes in IR energy that occur with movement. We designed this 3-1 kit for use in small homes and apartments. If you ever up-size, then you can easily add more sensors if needed.

The AT&T LTE Communicator allows you to connect this system with the Alarm.com servers. This is important for receiving reliable monitoring service. Once activated, you can control the system through the Alarm.com website or app. This will let you arm/disarm, check status, and control Z-Wave devices from virtually anywhere. Just keep in mind that you need an appropriate alarm monitoring plan to activate the communicator. Examples of plans you can use include the Gold and Platinum Plans from Alarm Grid. This panel also includes built-in WIFI for dual-path connectivity.

Also bundled with this kit is a Honeywell LT-Cable. This is used for connecting the system with its included transformer. The entire system kit can be installed with just a screwdriver!