Does the Honeywell 5800C2W Work w/ the Lyric Controller?

The way that the Honeywell 5800C2W works is actually fairly simple. The device comes with a transformer, and it is plugged into a wall outlet. Because it has its own transformer, it will also need its own backup battery in case the power goes out. Sometimes, if the battery for the wired system being replaced is not too old, it can be used as the backup battery for the 5800C2W. Hardwired sensors are then wired directly to each zone input on the 5800C2W. Each hardwired input will require its own individual wireless zone on the system.

If the zones were wired without End of Line Resistors on the previous system, use one of the resistors included with the 5800C2W, and attach it to each hardwired zone input. If one of the nine zone inputs will not be used, do not connect anything to its positive terminal. Once all zones are connected with resistors, follow the instructions for calibrating the 5800C2W. After calibrating, learn in the zones, by putting the Lyric Controller into its wireless enrollment mode. Then fault and restore each wired sensor three times to auto-learn it in. The hardwire sensor will learn as a wireless sensor, using a serial number based around that of the 5800C2W. The settings for that zone can then be configured as needed. 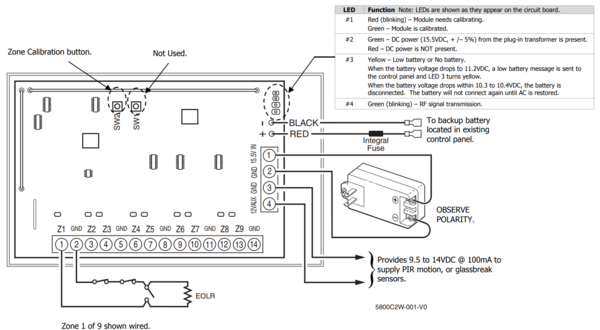 The 5800C2W will support up to 9 hardwired sensors. If a user needs to set up additional hardwired sensors, then they can use a second 5800C2W device. Each 5800C2W device will have its own transformer, backup battery and unique set of serial numbers for learning in its own hardwired sensors with the Lyric Controller. Transformers and batteries can not be shared between multiple 5800C2Ws. A zone expander like the Honeywell 4219 cannot be used with the Lyric Controller. Instead, if a 4219 is in use, it should be replaced with a 5800C2W. Users should also keep wireless signal range in mind when setting up sensors with the 5800C2W. If wireless range is a concern, then a Honeywell 5800RP Wireless Repeater can be used.