How Do I Clear a Latched Alarm Using a Tuxedo Touch Keypad?

You can clear a latched alarm using a Tuxedo Touch Keypad by disarming the Honeywell VISTA System. This will require entering a valid user code or the Master Code. You will then need to clear the fault from the zone list before the alarm will fully clear. Again, a code must be entered.

A latched alarm refers to a situation where the system is "stuck" in alarm mode. Although there is a bell timeout setting to prevent the system's siren from sounding indefinitely, a VISTA System will remain latched, or stuck, in its alarm mode until the alarm is cleared. This is called Alarm Memory. Clearing the alarm is done by performing a disarm for the system and clearing the fault.

Alarm Memory is a feature of all Honeywell panels. This feature assures that you will never have an alarm on your system that you're unaware of. When you leave your home and arm your system, you know that one of the first things you'll do upon returning home is to disarm the system. If an alarm occurred while you were away, and if the alarm were able to be cleared with a single disarm, then it is possible that you could have had an alarm on the system that you are unaware of. This is less likely to occur today with remote notification features such as Total Connect 2.0, but this is why you can't clear an alarm condition with a single disarm.

When an alarm is first triggered, you will get an indication on the Tuxedo Touch Keypad. You will be prompted to enter a valid code to disarm. Entering the system's Master Code or any valid user code (except the Installer Code) will silence the alarm. But this will not clear the alarm from memory. And with the disarm option greyed out, you cannot perform a second disarm from the Tuxedo Touch. Instead, you will pull up the zone list and clear the faulted zone. All of this can be done without needing to use the Console Mode for the keypad.

It is important to note that you cannot fully clear an alarm until the faulted zone is restored. For example, if the alarm was caused by a door and window sensor set as 03-Perimeter, then you must close the door or window associated with the zone for the alarm to clear. Likewise, if you have a smoke detector that set off a fire alarm, then you will need to clear the smoke from the chamber in order for the sensor to restore. This must be done before the system will show that the alarm has been fully cleared.

Please note that the process for clearing a latched alarm can vary slightly between burglary/intrusion alarms and life-safety alarms. For this FAQ, we will cover both processes in the same set of steps, due to the general similarities in the process. Just be cognizant of the subtle differences depending on the type of alarm you are clearing.

1. Silence the alarm. When an alarm appears on your system, the first thing you will likely want to do is silence the beeping keypad and/or any blaring sirens. These sounds are designed to alert you to the alarm. Once you have been properly alerted and the situation is under control, it is safe to stop the sounding.

In this case, a numeric keypad will appear on the Tuxedo Touch screen. Silence the alarm by entering the system's Master Code or a any valid user code (except the Installer Code). It's also worth mentioning that if the alarm in question is a life-safety alarm, then there will be a "Touch Here to Silence" button. Simply press that button, and then enter the code like normal. Remember, you will only get the "Touch Here to Silence" button if it is a life-safety alarm such as a Fire alarm, or a Carbon Monoxide alarm. 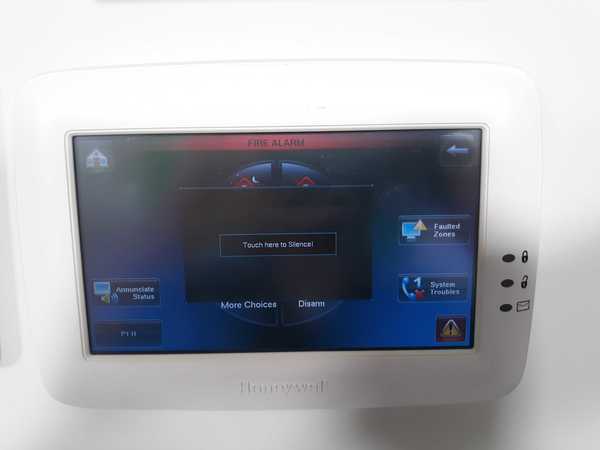 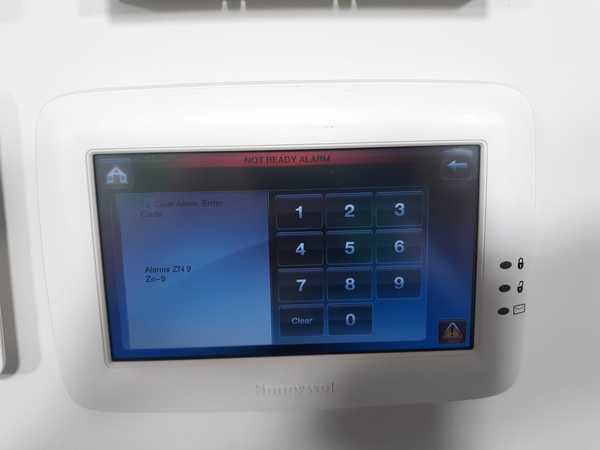 You may also get an Alarm Cancelled message if you clear the alarm before the system was able to send an alert to a central station or AlarmNet360. This occurs if the "Cancel Verify" option is enabled in the alarm panel. If that is the case, just choose the "Clear" option, and provide a valid system code. You must still follow the remaining steps, but this again tells the system that you have acknowledged the alarm. 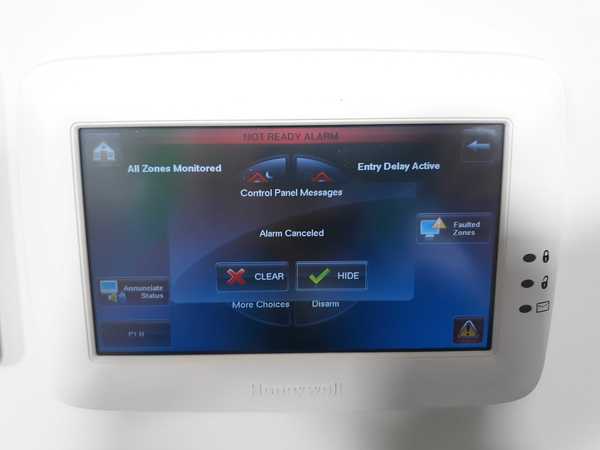 2. Restore the faulted sensor. Now that the sounding has stopped, you can peacefully address the cause of the alarm. Before you can completely clear the alarm from the system, you must address the sensor that caused the alarm. For example, if a door/window sensor with a 03-Perimeter Response Type was faulted, then you will want to close that sensor. Or if a smoke detector detected smoke, then you must wait for smoke to exit its detection chamber. In any case, you must "restore" the associated sensor for the zone that caused the alarm.

The reason why you need to do this is because the next step in the process is clearing the fault. A Burglary alarm will be displayed as a fault once it has been silenced. If the system detects that the sensor in question is still faulted, then the alarm will remain latched. How you restore the faulted sensor will depend on what type of sensor caused the alarm in the first place. Some sensor types, like motion sensors, will just need to be left alone and not be triggered by any movement. But if you have a sensor that can be "restored", such as a contact sensor or a smoke detector, make sure it is restored before continuing.

3. Clear the faulted zone. At this point, the alarm should be silenced, but the top of the Tuxedo Touch will still read "Not Ready Alarm", "Fire Alarm", or some other variant to let you know that the alarm has not yet been cleared. This is because you still need to formally clear the faulted zone. Do not attempt to do this until you have successfully restored the faulted sensor, or else the system will refuse to acknowledge the zone as cleared.

On the right-hand side of the Tuxedo Touch Security Menu, you should see the Faulted Zones button. Click that option to display the list of faulted zones. Then choose the Clear button at the bottom of the screen. Then provide the system Master Code or a valid user code (other than the Installer Code) when prompted. In some cases, you may need to perform this process of clearing the faulted zone twice before the alarm will clear. 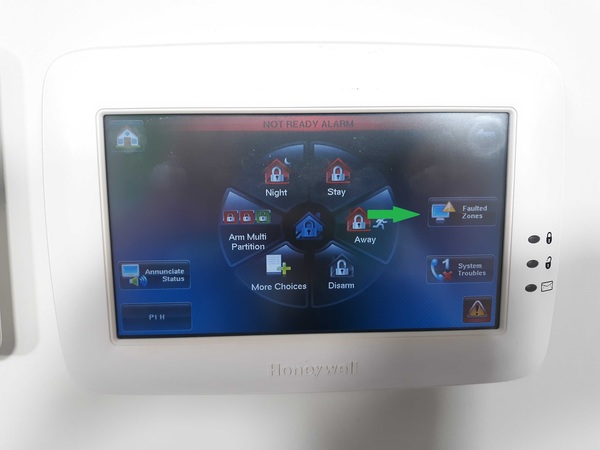 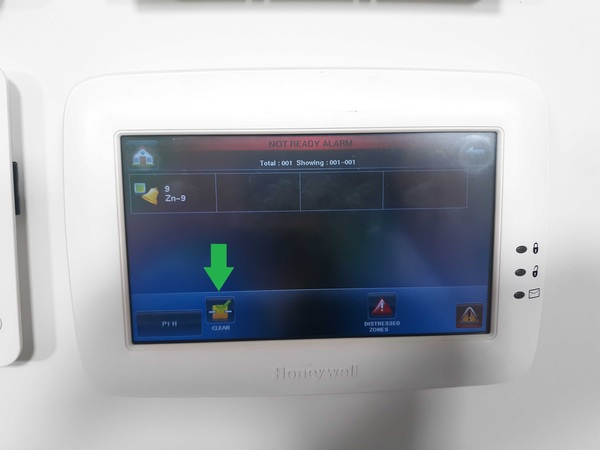 4. Confirm the cleared alarm. After entering a valid code at the "Clear" screen, you should get a green "Ready to Arm" bar at the top of the keypad. If not, make completely sure that you have restored the faulted sensor, as described in Step 2. In some cases, you may have to repeat Step 3 a second time just to get the alarm to clear. That is normal. Once you get the green "Ready to Arm" message, you can return to the home screen by clicking the house in the upper-left corner. 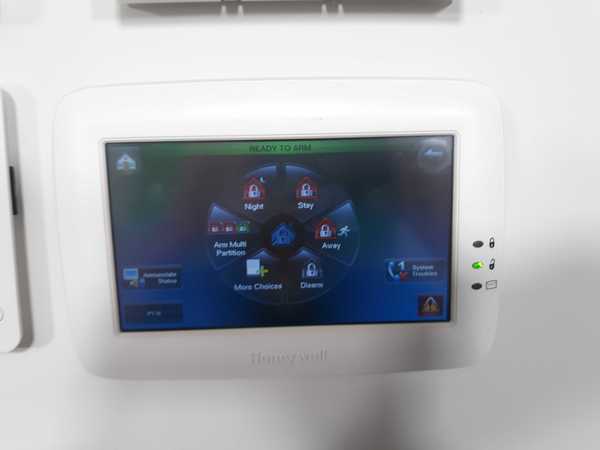