How Do I Clear a Low Battery in My Honeywell Vista P Series Panel?

Clearing a Low Battery On a Vista P Series Panel

To clear a low battery display, you must first clear the low battery condition. Do this by demonstrating to the panel that the battery is present and that it will hold up under load. The easiest way to do this is with a walk-test. Enter walk test mode by pressing Installer Code + 5 + 0. 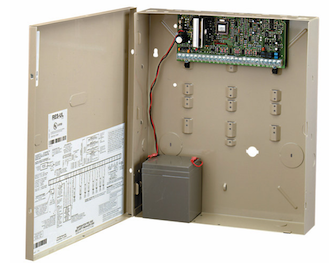 A Vista P-Series Alarm Panel supervises its battery in two ways. Every three (3) minutes, the panel checks to verify that a battery is present and connected to the system. In addition, every four (4) hours the panel does a two (2) minute load test to verify that the battery is capable of supporting the panel load in the event of an AC loss. If the battery fails either of these tests, a low battery message will be displayed on the keypad, along with a rapid trouble beep. The trouble beep can be silenced by entering any valid 4-digit code, plus Off [1]. A low battery trouble will not prevent the panel from being armed.

A Vista P-Series Alarm Panel uses a 12-Volt Lead-Acid Battery. When AC power is present, the panel provides a trickle charge to the battery. When AC power is lost, the battery then takes over to provide the necessary current to power the panel until AC power is returned. Depending on how often the panel must run on battery power, the panel's battery will last around three (3) to five (5) years. When the battery starts to fail, users will see low battery messages on the keypad, even when there has been no AC loss. This is because the existing battery is beginning to fail the panel's load test.

When a low battery condition is caused by a failed load test, it requires that the battery pass a load test to clear the low battery display. An older battery may fail, then pass the load test for some time before failing completely. This will result in multiple low battery warnings, followed low battery restore conditions. When this begins to happen, it is best to replace the battery and avoid the annoyance. One of these two batteries can usually replace the existing bad battery.

There are two ways to load test a battery. One is to replace the existing battery, verify that AC power is present, and then wait for up to four (4) hours for the panel to run its usual load test. In some cases, the new battery may need a bit longer to charge, so a low battery message may persist for up to 24 hours before it will clear on its own. Another way is to force a load test of the battery. This is done by performing a walk-test. In order to perform a walk-test, the system must be ready. Any faulted zones must be bypassed. At the keypad, enter the Installer Code, Master Code, or Partition Master Code + [5] + [0]. Be aware that as part of the load test, the siren will sound for about two (2) seconds. An alpha keypad will display "Test in Progress", and the keypad will emit a single beep every 40 seconds to remind the user that the panel is in test.

Once the panel is in walk-test mode, allow it to stay that way for about five (5) minutes. To exit the walk-test, enter the Installer Code, Master Code, or Partition Master Code + Off [1]. The panel will exit test mode on its own after four (4) hours if the user forgets to exit. If the battery passed the load test, the low battery condition will clear when test mode is exited. If it did not pass and the battery is new, allow it to charge for up to 24 hours. Then, if necessary, try the test again.

A quick recap of those steps: