How Do I Enroll a VERSA-GE Sensor With a Qolsys IQ Panel 2 Plus?

You can enroll a VERSA-GE Sensor with a Qolsys IQ Panel 2 Plus by putting the system into its auto-enrollment mode and then activating the sensor's tamper cover. The system will recognize the new sensor and allow you to configure its programming settings. Save your changes when finished. 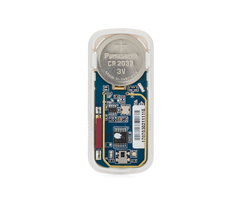 Complete the following steps to enroll a VERSA-GE Sensor with a 319.5 MHz Qolsys IQ Panel 2 Plus:

2. Enroll the sensor. With the battery installed, open the tamper cover for the VERSA-GE Sensor. The system will recognize the sensor and ask if you want to continue. Choose OK. You can then reapply the tamper cover. Alternatively, when enabled in installer/dealer settings, you can fault and restore the sensor to auto-enroll. To do this, hold the included magnet against the sensor then separate it from the sensor. This will release a reed switch inside the sensor. The system should recognize the fault and ask if you want to enroll the device. Select OK to continue.

3. Configure the zone. Adjust the zone settings accordingly. The Sensor DL ID should be already filled-in since you auto-enrolled. The Sensor Type should be Door/Window. Set the Sensor Group based on how you want the system to respond when the sensor is faulted (Group 10 is the default for this Sensor Type). Provide a Sensor Name. Choose a Chime Type. You can set the Chime Type to "None" if you don't want the zone to chime. Set Voice Prompts to On or Off. The Source should already be set since you auto-enrolled.