How Loud is the Honeywell L5210's Internal Siren?

The Honeywell L5210 has an internal siren that outputs 85 decibels. This volume level is about as loud as a motorcycle. Its volume cannot be adjusted, but the siren can be turned off in system programming. The siren then operates at a much lower level, and it is used mainly for testing. 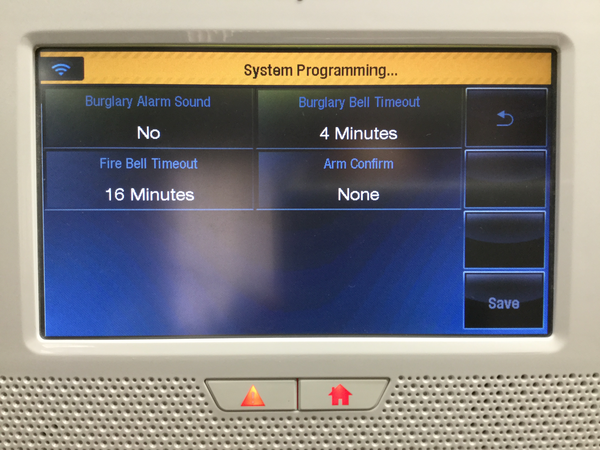 It's important to note that if the internal siren was turned off, it must be turned back on for the siren to operate. In the case that 85 decibels isn't loud enough for the user, the L5210 does support a wireless siren and wired sirens with a relay. It supports the Honeywell 5800WAVE wireless siren, which is a fully wireless siren with a battery backup. The 5800WAVE is required to be plugged into an AC outlet, and must match up the House ID with the L5210s "RF House Code." This code is found under "System Type" in installer programming mode. As long as these codes match up, the siren will sound during all alarm events. The siren keeps its battery fully charged when plugged into AC power, and automatically switches to backup power during AC power loss. Once a zone is programmed using the serial number listed on sire, it can notify the system when its power is low, if there is a loss of RF check in transmissions, a low battery, or an AC power loss. The siren itself has a 95dB sounder in the unit, and can function up to 200 feet from the main system.

Two other options available for interfacing a siren to the L5210 system are the LYNX-WEXT and LYNX-EXT kits. The LYNX-EXT kit is the easiest way to integrate a wired siren with the system. It includes a 5800RL, which is a wireless relay that does not require any wiring back to the alarm panel. This means that the user's wiring can be done locally between the transformer, relay, and aux power supply. The LYNX-WEXT, on the other hand, requires a 2 conductor cable between the L5210 and a wired relay. Instead of wirelessly triggering the 5800RL, the WEXT kit uses the wired trigger output on the L5210 to inform the Altronix RBNSTTL relay. Both kits require local wiring between the transformer, aux power supply, and wired siren. The only difference between them is how the relay is triggered in alarm mode, and told to offer power to the siren.To recap, WEXT is hardwired from the trigger output, and EXT is wireless.

The limiting factor when choosing which wired sirens to install is the current draw of each device. The AD12612 aux power supply provided in both kits will supply 1.2 Amps or 1200mA. The user needs to stay under this number on their total draw from all sirens. For example, the WBOX 0E-OUTDSIREN is a very loud outdoor siren at 120dB, and draws 670mA. So, the available power supply will only support one of them. However, if the user wants multiple sirens, they can be mixed and matched. The 747 is a simple indoor siren that outputs 95dB and draws 400mA. The 719 is a bullhorn style outdoor ready siren that pushes 115dB and pulls 550mA. The user can install both of these sirens, as their total draw will be 950mA.

How Loud is the Honeywell L5210's Internal Siren?