Why Does My 2GIG System Beep When I Arm Away?

Your 2GIG System beeps when you Arm Away because it wants to make sure that you and everyone else in the building leaves the premises before the Exit Delay Countdown expires. Failure to do so could result in someone activating an Interior Zone and causing a false alarm on the system.

Arm Away mode is one of two (2) main arming settings on a security system, with the other being Arm Stay. The main difference between Arm Away and Arm Stay is that Interior Sensors are active in Arm Away mode, and they are automatically bypassed in Arm Stay mode. The reason for this is that setting the system to Arm Stay mode generally means that at least one person is remaining inside the building. By bypassing any Interior Sensors, the person or people still inside the building will be able to move around freely, without having to worry about accidentally activating the system. However, the system will still take usual action if an Entry/Exit Zone or a Perimeter Zone is faulted while the system is Armed Stay. The most common sensors to receive an Interior Response Type include interior door sensors and interior motion detection sensors.

But when you Arm Away, these Interior Sensors will become active. Faulting one of these sensors while the system is Armed Away without first activating an Entry/Exit Sensor will result in an immediate alarm on the system. This is because there is supposed to be nobody left inside the building when you have Armed Away. If an Interior Zone is faulted while the system is Armed Away, then the system thinks that there is a major security breach, and it triggers the alarm. However, there are cases where false alarms occur on security systems because a user Arms Away and doesn't leave the building. They then fault an Interior Sensor, and an alarm occurs. The most common reason why this is occurs is because the user accidentally Armed Away when they meant to Arm Stay. In order to make sure that the user knows that they have Armed Away, the system will begin beeping as a warning to exit before the countdown period expires.

If you want the system to stop beeping after you have Armed Away, then you can press the Silence button that appears. This will stop the system from beeping during the Exit Delay Countdown. Just be aware that you will still need to exit the building before the countdown expires, or else you risk setting off an Interior Sensor and triggering an alarm. Make sure that everyone else in the building also knows to leave the premises at this time. A person accidentally left inside the building can result in a false alarm.

The picture below shows the Silence button on a 2GIG GC3 Security System: 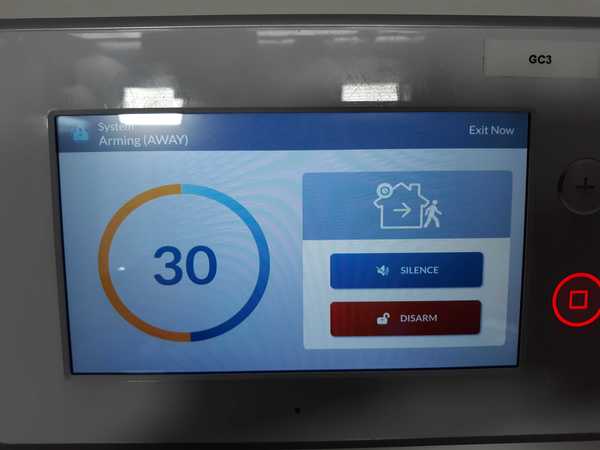