Are There Encrypted Sensors For a 2GIG GC2e?

Yes, there are encrypted sensors for a 2GIG GC2e. The 2GIG Encrypted Sensors can easily auto-enrolled with the system and used however the user sees fit. These wireless sensors are more secure and less prone to hacking or takeover attempts that could potentially disable non-secure sensors. 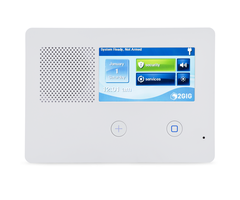 An encrypted sensor follows a unique process when it is enrolled. A secure encryption key will be established between the sensor and the panel upon device enrollment. By establishing this secure key, the sensor and the panel basically become linked together. The sensor will then need to include the encryption key with any fault signal that is sent to the panel. This helps to ensure that any signal sent to the panel is legitimate. By requiring this secure encryption key, it will be nearly impossible to trick the panel with a false or misleading signal. Some different types of encryption for security systems include rolling code and AES.

Using an encrypted sensor results in much better security than a non-encrypted sensor. With a non-encrypted, unsecure sensor, the device is just merely sending signals to the panel. The panel does not do any real check to make sure that any given signal is legitimate. As a result, the sensor can get away with sending the exact same signal any time for any particular action. It is very easy to mimic this signal and trick the panel into thinking that an action is being performed, even when it really isn't. To prevent this issue, you should definitely use encrypted sensors with your most secure zones.

The 2GIG GC2e and 2GIG GC3e both support a shared lineup of encrypted sensors from 2GIG. These sensors are designed for the two (2) systems only. Using these sensors is important if you want to make sure that your GC2e System is kept as secure as possible. Only a small selection of 2GIG Encrypted Sensors are available as of October, 2019. You can supplement these sensors with non-encrypted sensors from the Honeywell 5800 Series or the 2GIG 345 MHz Sensors for a complete security system.

At the time of this writing, only the following 2GIG Encrypted Sensors are available, with more expecting to be arriving sometime in the neat future: