How Do I Power Cycle My Wired Alarm System?

You can power cycle your wired alarm system by dropping both AC and battery power to shut down the system, and then turning it back on by restoring AC power first and then battery power second. This process is more formally known as a power cycle reset. It is often used for troubleshooting.

If something on your system isn't functioning properly, you may perform a power cycle reset to see if that fixes the problem. Also, if you are installing new system hardware, such as a new communicator or keypad, then you will always want to power down your system first before installing any new hardware. Then you will power your system back on when the job is done. See this FAQ for more info about resetting a wired system.

1. Remove battery power. The first thing you should do is drop the backup power source for your panel. Most wired alarm panels are housed inside of an enclosure that also stores various system accessories. The system's backup battery is most likely a large black or gray box found inside this enclosure. Take the positive (red) wire, and disconnect it at the battery terminal. You can do this by gripping the wired connection and then firmly pulling it off the battery terminal. Never attempt to yank the wire, as this can cause damage. 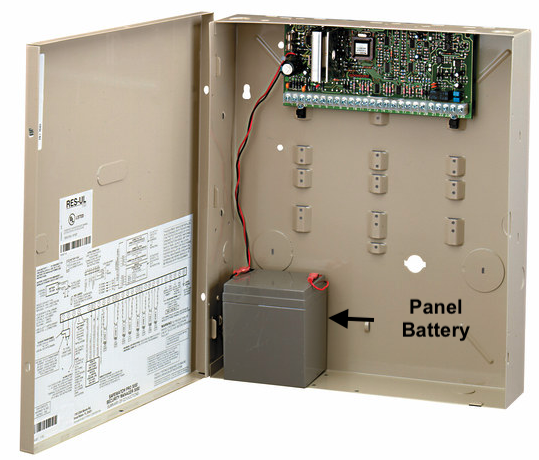 2. Drop AC power. You will now disconnect AC power, which is the system's primary power source, There are a couple of ways you can do this. You can unplug the system's transformer from the wall outlet. You can also switch off power to the outlet at the circuit breaker. But what you should not do is try to disconnect the wired connections at the panel itself. If you attempt to power down in this way and one of the live wires you remove from the panel touches the wrong area, the transformer and the panel itself can be damaged. With both battery power and AC power removed, the system should power down.

3. Restore AC power. When restoring power to a wired alarm panel, you want to start with AC power. Plug the system's transformer back into the wall outlet and/or reapply power at the breaker. Restoring AC power will cause the system to power back on.

4. Restore backup power. You can now reconnect the system's backup battery. This should be done immediately after restoring AC power. You can accomplish this by reconnecting the positive (red) wire that you removed in Step 1 to the battery terminal. Make sure that the wire is fitted properly. If you do not immediately restore the battery connection, you will likely see a Low Battery message on the panel. If the battery is in good condition and is fully charged, this error should clear on its own within a few minutes. If you need assistance clearing a Low Battery message on a Honeywell VISTA panel, read here. 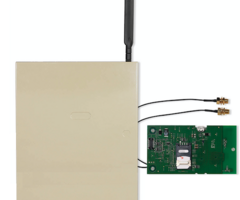